War and Tropical Forests
Conservation in Areas of Armed Conflict 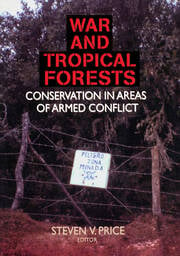 War and Tropical Forests: Conservation in Areas of Armed Conflict

Explore the conservation implications of recent armed conflicts in the tropical forest regions of Asia, Africa, and Latin America!

From the lowland rainforests of the Colombian Amazon to the rugged habitat of Rwanda's mountain gorillas, civil, ethnic, and international wars have had severe impacts on tropical forests and the communities they sustain. The reemergence of war and the persistence of its impacts have led many conservationists to reassess their efforts and adapt their strategies to a new set of responsibilities and urgent challenges. War and Tropical Forests: Conservation in Areas of Armed Conflict explores these challenges and the lessons learned by conservationists working in conflict zones around the world. It combines case studies and comparative analyses by leading experts in ecological research, environmental policy, and conservation field programs to provide insight into the environmental dimensions of recent social, political, and humanitarian crises.

War and Tropical Forests reviews lessons learned from conflict zones around the world and explores:

This essential book also examines: War and Tropical Forests also addresses the role of militaries in the inequitable control and illicit use of forest resources, the environmental impact of refugees, the growing social and environmental costs of efforts to eradicate drug crops, and the impact of conflict on protected area management in the habitat of Africa's endangered great apes.

War and Tropical Forests is an essential resource for conservation practitioners and policymakers, as well as anyone involved with human rights, conflict resolution, rural development, international law, or foreign relations.