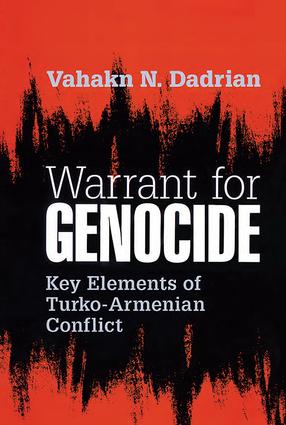 Warrant for Genocide provides a unique, interdisciplinary approach to understanding the underlying causes of the World War I Armenian genocide. It traces genocide to the origin and history of the long-standing Turko-Armenian discord with the massacres treated as a means to resolve the conflict between a powerful, dominant group and a weak, vulnerable minority.

The World War I destruction of the Armenian people in the Ottoman Empire was neither an accident nor an aberration. The seeds of the large-scale deportations and massacres of Armenians can be found in the 1919u1920 Turkish Courts Martial documents of leaders of the Young Turk Ittihadist regime. These were replete with xenophobic nationalism, calls for the use of arms to achieve that end, and references to Islam to incite the masses against Armenians. The utmost secrecy, camouflage, and deflection with respect to their plans were evident in what was not said. This was a drastic departure by the regime from its publicly proclaimed posture of egalitarianism, heralding the dawn of a new era of multiethnic harmony and accord in the decaying empire.

Dadrian carefully details these calculated deliberations and the concomitant shift from Ottomanism to Turkism in the radical wing of the regime. He illustrates how this rekindled enmities between dominant Turks and subject minorities. The desire to neutralize or eliminate the opposition helped pave the way to a new and radical nationality policy. To Dadrian, the act of genocide was a draconian method of resolving a lingering conflict.

No analysis of the Armenian genocide can be adequate without understanding the origin, elements, evolution, and escalation of the Turko-Armenian conflict. Dadrian details this admirably, showing that in the final analysis, the Armenian genocide was a cataclysmic by-product of this conflict. Genocide and Holocaust scholars, Armenian area specialists, and human rights activists will consider this an essential addition to the literature.