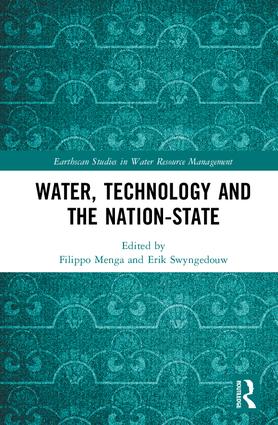 Water, Technology and the Nation-State

Just as space, territory and society can be socially and politically co-constructed, so can water, and thus the construction of hydraulic infrastructures can be mobilised by politicians to consolidate their grip on power while nurturing their own vision of what the nation is or should become. This book delves into the complex and often hidden connection between water, technological advancement and the nation-state, addressing two major questions. First, the arguments deployed consider how water as a resource can be ideologically constructed, imagined and framed to create and reinforce a national identity, and secondly, how the idea of a nation-state can and is materially co-constituted out of the material infrastructure through which water is harnessed and channelled.

The book consists of 13 theoretical and empirical interdisciplinary chapters covering four continents. The case studies cover a diverse range of geographical areas and countries, including China, Cyprus, Egypt, Ethiopia, France, Nepal and Thailand, and together illustrate that the meaning and rationale behind water infrastructures goes well beyond the control and regulation of water resources, as it becomes central in the unfolding of power dynamics across time and space.

"Water, Technology and the Nation-State is an extraordinary and path-breaking master piece on the political ecologies of state-production and resistance -- intellectually rich, socially urgent and politically highly revealing. The book presents a careful, critical analysis of how flows of water and power interconnect technology, nature and society. In a sophisticated way, Menga, Swyngedouw, and their impressive assemblage of authors, scrutinize and illuminate the multi-dimensional interdependence among technological trajectories, hydro-territorial configurations and nation-state building. Constituting a powerful critique of neoliberal water governance and water’s de-politicizing expert-thinking, the book also offers crucial water-for-thought for building alternative hydrosocial territories." - Rutgerd Boelens, CEDLA/University of Amsterdam, The Netherlands

"The world’s water crisis is not only an issue of physical scarcity and declining water quality, rather it is a complex suite of social, political, and economic issues that are deeply rooted in power and the state. Menga and Swyngedouw’s thought-provoking edited volume brings together a highly talented and diverse group of scholars and practitioners that explore the inter-connection between water, technology and the nation-state. This book is a must-read for anyone interested in transcending national rhetoric around water, and working towards water justice and equity." - Emma S. Norman, Northwest Indian College, USA

"Water, Technology and the Nation-State arrives at an opportune time for water-society scholars and practitioners interested in the profound ways that technological innovations have concurrently shaped waterscapes, state practices, and national identities over the past several decades. A diverse group of critical thinkers infuse cases of large-scale infrastructure development--spanning Asia, the Middle East, North America, Europe, and East Africa—with novel and incisive analyses of how water technologies are always and everywhere political and often fundamental to the exercise of state power. Combining conceptual muscle with heretofore rare case studies, this volume adds immeasurably to theories of state-nature relations and offers concrete instances of the myriad ways that dams, irrigation and hydropower have become hegemonic, and often domineering, technological interventions in human relations with water." - Christopher S. Sneddon, Dartmouth College, USA

"…this book is important and should have wide appeal. Each chapter presents an insight into the complex and contradictoy relationship between Nation-State and water technology based on a case study analysis of a project or initative…There are 12 studies in total, with broad representation across the Global North and the Global South." - Lucy Goodman in Urban Studies, 2019

"The nation state plays a privileged role in water management and hence is a central actor in all questions regarding processes of water allocation, water infrastructure construction, reform of water institutions, and regulation of water pollution. The collection put together by Menga and Swyngedouw presents historical and current cases of state-centred water politics…Altogether, the collection manages to extract an impressively broad spectrum of aspects of its guiding themes." - Sören Köpke in Water Alternatives, 2019

Filippo Menga is a Lecturer in Human Geography in the Department of Geography and Environmental Science at the University of Reading, UK

Erik Swyngedouw is Professor of Geography in the Department of Geography, School of Education, Environment and Development at the University of Manchester, UK.