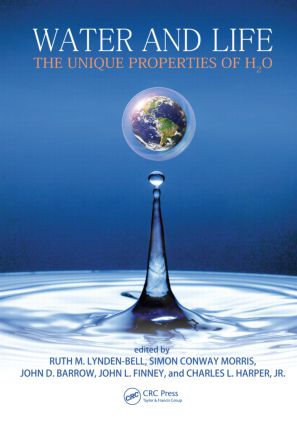 Reflecting a rich technical and interdisciplinary exchange of ideas, Water and Life: The Unique Properties of H20 focuses on the properties of water and its interaction with life. The book develops a variety of approaches that help to illuminate ways in which to address deeper questions with respect to the nature of the universe and our place within it.

Grouped in five broad parts, this collection examines the arguments of Lawrence J. Henderson and other scholars on the "fitness" of water for life as part of the physical and chemical properties of nature considered as a foundational environment within which life has emerged and evolved. Leading authorities delve into a range of themes and questions that span key areas of ongoing debate and uncertainty. They draw from the fields of chemistry, biology, biochemistry, planetary and earth sciences, physics, astronomy, and their subspecialties. Several chapters also deal with humanistic disciplines, such as the history of science and theology, to provide additional perspectives.

Bringing together highly esteemed researchers from multidisciplinary fields, this volume addresses fundamental questions relating to the possible role of water in the origin of life in the cosmos. It supports readers in their own explorations of the origin and meaning of life and the role of water in maintaining life.

This book highlights the role that water plays in the origin, environment, and function of life, as well as the importance of water in human beliefs. … Each section includes chapters by leading scholars. … Recommended.

"This most intellectual collection of essays brings into focus how remarkable this ubiquitous molecule water really is. While defining much of what is known it also leaves many questions that still require answers, such as can the evolutionary process both cosmic and organic be regarded as biocentric? Any thinking scientist interested in the life processes will find this a totally fascinating read."

"It covers a wide range of subjects in great detail … the book is interesting with well-considered perspectives. … [it] would be of greater interest to water professionals and scholars and may serve to allow greater understanding amongst the many disciplines present in the water research community."

"In the present volume, you will find a much deeper probing, often with the powerful tools of quantum mechanics, of the subtle and sometimes unexpected features of the water molecule in its various states. … You will find here a group of counterfactual studies, where the chemists have picked up the challenge of the cosmologists to imagine other universes where certain physical constants are different. (Of particular interest is the strength of the hydrogen bond, with its implications not only for the physical behavior of water, but for the zipping or unzipping of the nucleic acid links in the strands of genetic DNA.) Toward the end of the book, a more philosophical approach to these pursuits is taken, searching for possible implications to the ‘big questions’ and asking whether anything from the biochemical laboratories hints at an answer about the purposefulness of the universe. Perhaps not unexpectedly, the answers are ambiguous, and the search goes on."

Is Water an Amniotic Eden or a Corrosive Hell? Emerging Perspectives on the Strangest Fluid in the Universe, Simon Conway Morris and Ard A. Louis

An Introduction to the Properties of Water: Which Might Be Critical to Biological Processes?, John L. Finney

Water as a Biomolecule, Philip Ball

The Specific Properties of Water—How and Why Water Is Eccentric

Water: Constraining Biological Chemistry and the Origin of Life, Steven A. Benner

Water, the Solar System, and the Origin of Life

What Is the Diversity of Life in the Cosmos?, Peter D. Ward

The Primordial Bubble: Water, Symmetry-Breaking, and the Origin of Life, Louis Lerman

Some Early Responses to the Special Properties of Water, Colin A. Russell

Ruth M. Lynden-Bell is emeritus professor of chemistry at Queen’s University, Belfast and an emerita fellow of Murray Edwards College at the University of Cambridge.

Simon Conway Morris is a professor of earth sciences at the University of Cambridge.

John D. Barrow is a professor of mathematical sciences and director of the Millennium Mathematics Project at the University of Cambridge, and Gresham Professor of Geometry at Gresham College.

John L. Finney is emeritus professor of physics in the London Centre for Nanotechnology at University College London.

Charles L. Harper, Jr. is chancellor for international distance learning and senior vice president of the American University System as well as president of Vision-Five.com Consulting.