Weather, Climate and Human Affairs (Routledge Revivals)
A Book of Essays and Other Papers 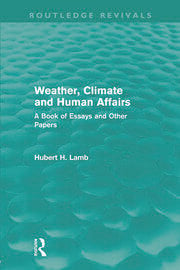 Weather, Climate and Human Affairs (Routledge Revivals): A Book of Essays and Other Papers

This wide-ranging collection of essays is written by one of the world’s foremost experts on weather and climate. Six of the chapters have not been published before. The rest, taken from a variety of sources, have been thoroughly revised and brought right up to date – taking account, for example, of the Chernobyl disaster, the risks of nuclear power, and the ozone controversy. Hubert Lamb is able to provide a mature assessment of the effect of weather on people, and vice versa. His is a uniquely authoritative voice in the current debates about today’s environment and the prospects for the future.
After a general introduction the book is divided into three parts. The first part consists of a chronological series of portraits of climate and its impact on human affairs and the environment. These extend from the warm climates of the geological past to the current drought in Africa. There are several studies of the last few centuries and, in particular, of the various effects of the so-called ‘little Ice Age’. The second part is concerned with the causes and mechanisms of climate and weather changes, including chapters discussing Christmas weather, fronts and volcanoes. In the final part Hubert Lamb looks to the future, and attempts to put into perspective some of the pessimistic forecasts currently available. The text, which is consistently authoritative but always readable, is augmented by numerous maps, diagrams and photographs.

1. Introduction  Part 1: Studies of Climatic History and its Effects on Human Affairs and Environment  2. The Earth's Restless Climate  3. Climate and History in Northern Europe and Everywhere Else in the Last Thousand Years  4. Climate and Life During the Middle Ages, Studied Especially in the Mountains of Europe  5. The Climate Theory of Race in Sixteenth- and Seventeenth- Century Literature and its Modern Implications  6. Climate in Historical Times and Transgressions of the Sea, Storm Floods and Other Coastal Changes  7. Some Aspects of the Little Ice Age and Other Periods of Cold, Disturbed Climate  8. Studies of the Little Ice Age: I, The Great Storms and Data Available for Establishing Details of the Period  9. Studies in the Little Ice Age: II, Changes in the Winds and Ocean Currents in the North-East Atlantic Region  10. Climate and Human, Animal and Crop Diseases, an Example: the Great Irish Potato Famine of the 1840s and some Lessons for Today  11. The Recent Increase of Storminess in and Around the North Sea Region and Related Changes Since the Twentieth-Century Climatic Optimum  12. Drought in Africa: the Climatic Background to a Threatening Problem of Today's World  Part 2: Climate and Weather Changes, Causes and Mechanisms  13. Causes and Time-Scales of Climatic Change  14. An Outline of the World's Wind Circulation and Weather Systems, and their Part in Variations of Weather and Climate, with Notes of some Relationships to Birds and the Living World  15. Christmas to New Year Weather as an Indicator of the Tendency of the Large-Scale Wind Circulation and Climate  16. Fronts and their Life History  17. Volcanoes and climate: An Updated Assessment  Part 3: Conclusion: What of the Future  18. The Future of the Earth: Greenhouse or Refrigerator