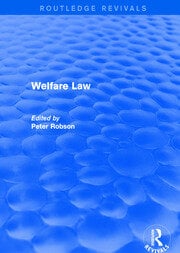 This title was first published in 2001: Welfare law is a legal field integral to most jurisprudential formulations, whether artificially designated as doctrinal, theoretical or practical. At its core, legal discourse regarding welfare challenges the formulations traditionally viewed as ’pre-legal’, the ’background rules’ of property, tort and contract law. In addition, it affects a large percentage of the world’s population, highlights the social construction of identities and perhaps more than any other area of law, graphically epitomizes the intersection of class, race and gender distinctions. However, within both the legal academy and practice, welfare law has been marginalized and viewed as a field that does not connect to any but a small sector of lawyers and legal clients. Isolated as an arcane domain of either statutory and regulatory legal minutiae or jurisprudential insignificance, welfare law has never realized its potential as a major hub for legal theoretical discourse. The articles in this volume seek to expose the roots of the essentialized view of welfare law as nonessential and re-establish its value and importance.