Welsh History in the Early Middle Ages
Texts and Societies 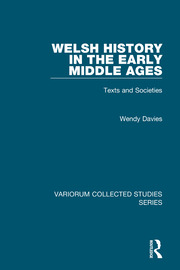 Welsh History in the Early Middle Ages: Texts and Societies

This volume brings together Wendy Davies's pioneering early studies on the text of the Book of Llan DÃ¢v alongside later pieces which explore the place of Wales in the wider world of the early middle ages. The Llandaff studies have provoked much subsequent comment: readers will find it helpful to reconsider what the author actually said about arguably the most significant surviving text for early medieval Welsh history - as opposed to the several published interpretations of what she is supposed to have said. The later work includes much-cited papers on the Latin charter tradition of the Celtic world and on 'Celtic' women; as well as studies of the so-called Celtic church and of the distinctiveness of Celtic saints - in all of which Welsh evidence makes a particularly important contribution. It also includes recent pieces on the environment and economy of early medieval Wales, which highlight some of the crucial new evidence provided by archaeology as well as historiographical issues that attract much current interest. Overall, the author has sought to make Welsh evidence accessible to scholars with interests in other parts of the middle ages and to ensure that Wales plays a part in broader surveys of early medieval Europe.

Wendy Davies is Professor Emerita in the Department of History at the University College London, UK.

’The Variorum Collected Studies Series has earned itself a well deserved reputation for bringing together the researches of well known scholars in the field of historical studies. The work of [Wendy Davies] needs no introduction to those interested in early Welsh and Breton history.’ Revue d'Histoire Ecclésiastique 'Davies’ work stands forth for its pioneering study of the charters in particular, and for its commitment to honest scholarly scrutiny of issues central to Welsh identity.' Parergon