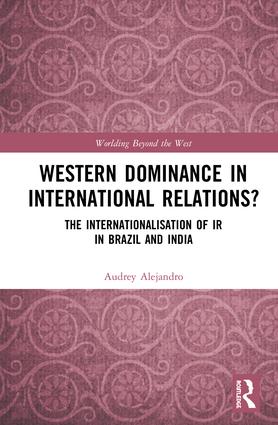 The Internationalisation of IR in Brazil and India, 1st Edition

Since the 1970s, a 'critical' movement has been developing in the humanities and social sciences denouncing the existence of 'Western dominance' over the worldwide production and circulation of knowledge. However, thirty years after the emergence of this promising agenda in International Relations (IR), this discipline has not experienced a major shift.

This volume offers a counter-intuitive and original contribution to the understanding of the global circulation of knowledge. In contrast to the literature, it argues that the internationalisation of social sciences in the designated 'Global South' is not conditioned by the existence of a presumably 'Western dominance'. Indeed, although discriminative practices such as Eurocentrism and gate-keeping exist, their existence does not lead to a unipolar structuration of IR internationalisation around ‘the West’. Based on these empirical results, this book reflexively questions the role of critique in the (re)production of the social and political order. Paradoxically, the anti-Eurocentric critical discourses reproduce the very Eurocentrism they criticise. This book offers methodological support to address this paradox by demonstrating how one can use discourse analysis and reflexivity to produce innovative results and decentre oneself from the vision of the world one has been socialised into.

This work offers an insightful contribution to International Relations, Political Theory, Sociology and Qualitative Methodology. It will be useful to all students and scholars interested in critical theories, international political sociology, social sciences in Brazil and India, knowledge and discourse, Eurocentrism, as well as the future of reflexivity.

"The book’s demonstration is fascinating and bolstered by a clear prose. It persuasively uses an impressive range of empirical data such as statistics on publications, academic CVs, academic promotion criteria, and interviews. It is also remarkable in its continuous deployment of a theoretical apparatus that taps into anthro-pology, sociology, and critical studies." - Benjamin Chemouni, University of Cambridge

Chapter 3: The Non-role of "the West"

Chapter 4: The National and the International

is Assistant Professor at the Department of Methodology, London School of Economics and Political Science.