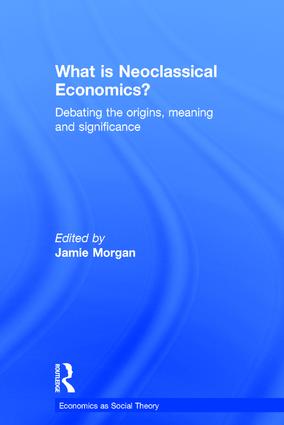 What is Neoclassical Economics?

Despite some diversification modern economics still attracts a great deal of criticism. This is largely due to highly unrealistic assumptions underpinning economic theory, explanatory failure, poor policy framing, and a dubious focus on prediction. Many argue that flaws continue to owe much of their shortcomings to neoclassical economics. As a result, what we mean by neoclassical economics remains a significant issue. This collection addresses the issue from a new perspective, taking as its point of departure Tony Lawson’s essay ‘What is this ‘school’ called neoclassical economics?’.

Few terms are as controversial for pluralist and heterodox economists as neoclassical economics. This controversy has many aspects because the term itself has different specifications and connotations. Within this multiplicity what we mean by neoclassical matters to pluralist and heterodox economists for two primary reasons. First, because it informs how we view and critique the mainstream; second, because the relationship between heterodox and mainstream economics influences how heterodox economists model, apply methods and construct theory. The chapters in this collection each have different things to say about these matters, with contributions ranging across the work of key thinkers, such as Thorstein Veblen and Kenneth Arrow, applied issues of non-linear modelling of dynamic systems, and key events in the history of economics.

This book will be of use to those interested in methodology, political economy, heterodoxy, and the history of economic thought.

‘What is neo-classical economics? Does the term pick out a coherent body of economic thought, a specific methodological stance or some more general distinctive position? Tony Lawson in a startlingly original contribution not only considers the origins of the term but shows how reflection on its meaning might be deployed to clarify the confused state of the contemporary academic discipline. In this excellent new collection a number of prominent economists and/or philosophers engage Lawson’s analysis. The result is essential reading for all those seeking to understand the nature of modern economics and/or wanting something better.’ — Dr. Stephen Pratten, King's College London, UK

‘Coming to terms with the concept of neoclassical economics is essential in understanding the continuing evolution of modern economics. Drawing on the traditions of political economy, economic methodology and the history of economic thought, this important and innovative volume is an excercise in pluralism. No consensus emerges, but the reader is left better equipped to compehend the different meanings of, and different perspectives on, this elusive concept.’ — Professor Dimitris Milonakis, University of Crete, Greece

Jamie Morgan is Reader at the School of Accounting, Finance and Economics, Leeds Beckett University, UK.

Social Theory is experiencing something of a revival within economics. Critical analyses of the particular nature of the subject matter of social studies and of the types of method, categories and modes of explanation that can legitimately be endorsed for the scientific study of social objects, are re-emerging. Economists are again addressing such issues as the relationship between agency and structure, between economy and the rest of society, and between the enquirer and the object of enquiry. There is a renewed interest in elaborating basic categories such as causation, competition, culture, discrimination, evolution, money, need, order, organization, power probability, process, rationality, technology, time, truth, uncertainty, value etc.

The objective for this series is to facilitate this revival further. In contemporary economics the label “theory” has been appropriated by a group that confines itself to largely asocial, ahistorical, mathematical “modelling”. Economics as Social Theory thus reclaims the “Theory” label, offering a platform for alternative rigorous, but broader and more critical conceptions of theorizing.