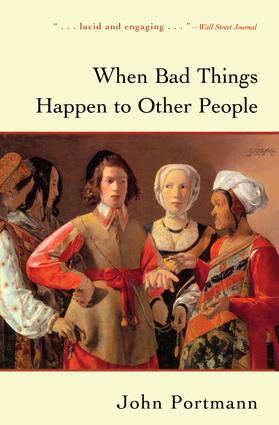 When Bad Things Happen to Other People

Although many of us deny it, it is not uncommon to feel pleasure over the suffering of others, particularly when we feel that suffering has been deserved. The German word for this concept-Schadenfreude-has become universal in its expression of this feeling. Drawing on the teachings of history's most prominent philosophers, John Portmann explores the concept of Schadenfreude in this rigorous, comprehensive, and absorbing study.

"…a valuable addition to moral philosophy because it points up some of the conundrums associated with a careful consideration of Schadenfreude." -- Philosophy and Literature

"…strongly recommended as a stimulating and perceptive examination of issues and questions relating to our attitudes toward the misfortunes of other people with which all of us are familiar in our moral lives." -- The Virginia Quarterly Review

"Schadenfreude is a fascinating emotion, much neglected but obviously of great importance for practical ethics and moral psychology. Portmann's book cuts across the intersection of current emotion theory, psychology and ethics and invites philosophical interaction with some classic literature on some of the nastier emotions. The author is obviously well-read and has a rich store of literary and philosophical examples." -- Robert C. Solomon, University of Texas at Austin

John Portmann has studied at Yale, Cambridge University, and L'ecole des hautes etudes in sciences sociales in Paris. He received his Ph.D. in philosophical and religious ethics from the University of Virginia, where he studied under James Childress, Daniel Westberg, Richard Rorty and Patricia Spears. He lives in Charlottesville, Virginia.