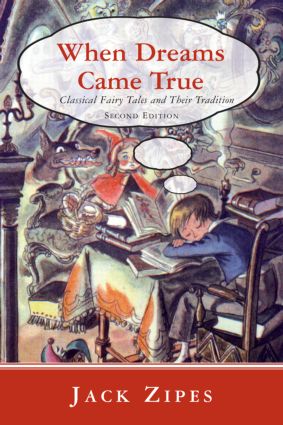 For centuries fairy tales have been a powerful mode of passing cultural values onto our children, and for many these stories delight and haunt us from cradle to grave. But how have these stories become so powerful and why?

In When Dreams Came True, Jack Zipes explains the social life of the fairy tale, from the sixteenth century on into the twenty-first. Whether exploring Charles Perrault or the Brothers Grimm, Hans Christian Andersen or The Thousand and One Nights, The Happy Prince or Pinocchio, L. Frank Baum or Hermann Hesse, Zipes shows how the authors of our beloved fairy tales used the genre to articulate personal desires, political views, and aesthetic preferences within particular social contexts. Above all, he demonstrates the role that the fairy tale has assumed in the civilizing process—the way it imparts values, norms, and aesthetic taste to children and adults.

This second edition of one of Jack Zipes’s best-loved books includes a new preface and two new chapters on J.M. Barrie’s Peter Pan and E.T.A. Hoffman’s The Nutcracker and the Mouse King.

"A fascinating social history of the uses and abuses to which fairy tales have been put in the course of their transformation from tales told orally by adults to adults into written (and frequently homogenized) bedtime stories parents read to the children. Zipes persuasively argues that fairy tales keep alive our ‘longing for a better world that can be created out of our dreams and actions’."—New York Times Book Review

"Zipes has forged a career out of brilliant and subversive analyses of fairy tales…Intelligent and thoughtful fun, without deconstructing the land of Faerie into dust and ashes."—Booklist

Preface to the 2007 edition Preface to the 1999 Edition 1. Spells of Enchantment: An Overview of the History of Fairy Tales 2. The Rise of the French Fairy Tale and the Decline of France 3. The Splendor of the Arabian Nights 4. Once There Were Two Brothers Named Grimm 5. The "Merry" Dance of the Nutcracker: Discovering the World Through Fairy Tales 6. I'm Hans Christian Andersen 7. The Flowering of the Fairy Tale in Victorian England 8. Oscar Wilde's Tales of Illumination 9. Carlo Collodi's Pinocchio as Tragi-Comic Fairy Tale 10. Frank Stockton, American Pioneer of Fairy Tales 11. L. Frank Baum and the Utopian Spirit of Oz 12. Revisiting J.M. Barrie's Peter and Wendy and Neverland 13. Herman Hesse's Fairy Tales and the Pursuit of Home Bibliography Index

Jack Zipes is Professor of German at the University of Minnesota. An acclaimed translator and scholar of children's literature, his most recent books include Why Fairy Tales Stick, Hans Christian Andersen: The Misunderstood Storyteller, Beautiful Angiola, and The Robber with the Witch's Head, all published by Routledge.