When Greeks think about Turks
The View from Anthropology 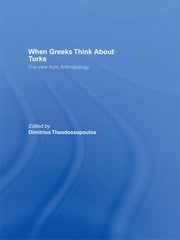 When Greeks think about Turks: The View from Anthropology

Drawing upon anthropological studies that document culturally specific ways of perceiving ethic Others in Greece and Cyprus, this book explores the cultural boundaries of the categories ‘Greek’ and ‘Turk’, and compares views on what it means to be one of these ethnic groups or both. The contributors examine the opinions of diverse social groups, such as ordinary middle-class citizens, intellectuals, army officers, children, villagers, refugees from Asia Minor, and Greek-and-Turkisj-Cypriots. They also investigate the local attitudes to international politics and highlight the contextual – as opposed to immutable and essentialist – meaning of evaluations about nations, such as Greece, Turkey and Cyprus, and their citizens.

When Greeks think about Turks carefully unpacks the cultural meaning of popular metaphors, stereotypes and versions of history as these are articulated in the context of discussions about the Turks in Greece. It sets the template for understanding how local perceptions of resemblance and difference provide a conceptual framework for defining and negotiating ethnic identity at the local, national and international level. It sheds valuable light on the politics of identity-making and the constitution of nationalism in Greece and Cyprus.

This book was previously published as a special issue of South European Society and Politics.

1. Introduction: The ‘Turks’ in the imagination of the Greeks  Dimitrios Theodossopoulos  2. How Greeks think: about Turks, for example  Vassos Argyrou  3. Tourkokratia: history and the image of Turks in Greek literature  Iraklis Millas  4. Knowledge of diversity: towards a more differentiated set of ‘Greek’ perceptions of ‘Turks’  Renée Hirschon  5. Beyond the Greek and Turkish dichotomy: the Rum-Polites of Istanbul and Athens  Ilay Romain Örs  6. Constructing 'the Turk' as an enemy: the complexity of stereotypes in children’s everyday worlds  Spyros Spyrou  7. Guarding each others’ dead, mourning one’s own: the problem of missing persons and missing pasts in Cyprus  Paul Sant Cassia  8. Writing about Turks and powerful others: journalistic heteroglossia in Western Thrace  Fotini Tsibiridou  9. Ethnic Turks and ‘Muslims’, and the performance of multiculturalism: the case of the Dromeno in Thrace  Vassiliki Yiakoumaki  10. Phantom menace: what junior Greek army officers have to say about Turks and Turkey  Elisabeth Kirtsoglou  11. Bicommunal initiatives and their contribution to improved relations between Turkish and Greek Cypriots  Peter Loizos  12. Politics of friendship, worldviews of mistrust: the Greek-Turkish rapprochement in local conversation  Dimitrios Theodossopoulos

Dimitrios Theodossopoulos is a lecturer in Anthropology at the University of Bristol. He is author of Troubles with turtles: Cultural Understandings of the Environment in a Greek Island (2003, Berghahn Books) and Mythical Lands, Legal Boundaries: Land, Law and Environment (2000, Pluto Press). He is teaching courses on ethnic identity and nationalism at the undergraduate and MA level, and he is the supervisor of an active team of research students working on identity issues. His most recent research is concerned with Greco-Turkish relations and the anthropology of conflict and nationalism in the Balkans. Theodossopoulos has recently edited two journal special issues [History & Anthropology 15(1), and Journal of Mediterranean Studies 14(1)] focusing on the work of ethnic stereotypes in Southeast Europe.