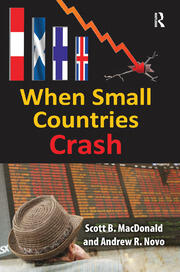 The public is fascinated with financial crashes. Historians portray the roar of an angry mob toppling presidents or prime ministers and destroying the property of those who are regarded as malefactors. And certainly, financial crisis is often a factor in political change. It is often overlooked, but nonetheless significant that one of the major causes for the French Revolution was the poor state of finances, with the nation coming to bankruptcy.

Large systemic financial crises create history. Various actors, big and small, become caught in the drama, contributing to it in their own special way. When Small Countries Crash seeks to capture some of the drama of financial collapses and their impact on small countries, which the authors define as populations under 10 million, generally 5-6 million. MacDonald and Novo have selected countries that have had a financial crisis in the national economy; that included key actors; and where access to reliable data is available.

As the authors demonstrate, the story of small countries suffering the costs of financial missteps is long and painful. They argue that smaller economies tend to be more vulnerable to economic shocks, many of which are externally generated. Small economies confront particular challenges in terms of economies of scale, diversification, and depth of expertise and workforce. The chapters in this absorbing book focus on Iceland, Latvia, Ireland, the Caribbean, Scotland, Finland, and Albania. This in-depth study is unique in its close look at financial disasters in countries that have, until now, been overlooked.