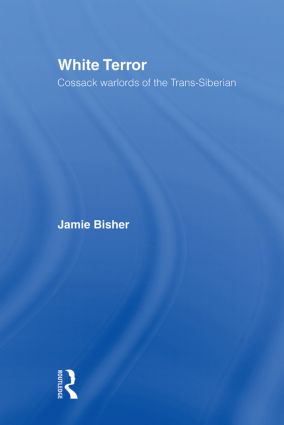 This is the gripping story of a forgotten Russia in turmoil, when the line between government and organized crime blurred into a chaotic continuum of kleptocracy, vengeance and sadism.

It tells the tale of how, in the last days of 1917, a fugitive Cossack captain brashly led seven cohorts into a mutinous garrison at Manchuli, a squalid bordertown on Russia's frontier with Manchuria. The garrison had gone Red, revolted against its officers, and become a dangerous, ill-disciplined mob.

Nevertheless, Cossack Captain Grigori Semionov cleverly harangued the garrison into laying down its arms and boarding a train that carried it back into the Bolsheviks' tenuous territory. Through such bold action, Semionov and a handful of young Cossack brethren established themselves as the warlords of Eastern Siberia and Russia's Pacific maritime provinces during the next bloody year. Like inland pirates, they menaced the Trans-Siberian Railroad with fleets of armoured trains, Cossack cavalry, mercenaries and pressgang cannon fodder. They undermined Admiral Kolchak's White armies, ruthlessly liquidated all Reds, terrorized the population, sold out to the Japanese, and antagonized the American Expeditionary Force and Czech Legion in a frenzied orchestration of the Russian Empire's gotterdammerung. Historians have long recognized that Ataman Semionov and Company were a nasty lot. This book details precisely how nasty they were.

"In historical studies as in legend, says Bisher, the Cossacks tend to appear as shadowy barbarians in the corner of the eye rather than as central players. An American veteran of international security programs with a long interest in the Russian Revolution, he describes the Cossack warlords by their actions, words, and the impressions on those around them in order to flesh out their role in the Russian Civil War, to dispel common rumors and disinformation, and to place the conflict in the Russian Far East in strategic perspective. He focuses on the infamous warlords that operated along the Trans-Siberian Railway from Irkutsk on Lake Baikalto Vladivostok on the Pacific Ocean." --Reference & Research Book News

Jamie Bisher has two decades of experience in technical writing, editing, research and analysis for U.S. defense programs such as the TACAMO EC-130 strategic communications aircraft, Navy satellite communications, Mobile Inshore Undersea Warfare, and Standard Missile, as well as various foreign military projects. At present he is a Senior Engineering Writer for a defense electronics firm in Maryland, where he also teaches English to immigrants in night school. His fascination with Russia dates back to his first visit to the Soviet Embassy in Washington in 1968, when he was 11 years old.