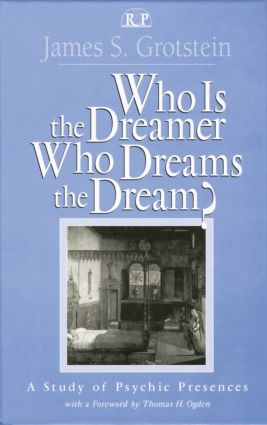 In Who Is the Dreamer Who Dreams the Dream? A Study of Psychic Presences, James Grotstein integrates some of his most important work of recent years in addressing fundamental questions of human psychology and spirituality. He explores two quintessential and interrelated psychoanalytic problems: the nature of the unconscious mind and the meaning and inner structure of human subjectivity. To this end, he teases apart the complex, tangled threads that constitute self-experience, delineating psychic presences and mystifying dualities, subjects with varying perspectives and functions, and objects with different, often phantasmagoric properties.

Whether he is expounding on the Unconscious as a range of dimensions understandable in terms of nonlinear concepts of chaos, complexity, and emergence theory; modifying the psychoanalytic concept of psychic determinism by joining it to the concept of autochthony; comparing Melanie Klein's notion of the archaic Oedipus complex with the ancient Greek myth of the labyrinth and the Minotaur; or examining the relationship between the stories of Oedipus and Christ, Grotstein emerges as an analyst whose clinical sensibility has been profoundly deepened by his scholarly use of mythology, classical thought, and contemporary philosophy. The result is both an important synthesis of major currents of contemporary psychoanalytic thought and a moving exploration of the nature of human suffering and spirituality.

"Who is the Dreamer Who Dreams the Dream? gives a clear picture of James Grotstein's very particular and individual post-Kleinian clinical and theoretical ideas, which build on the work of Freud and Melanie Klein as developed by Wilfred Bion. Readers will find that, while traversing clinical psychoanalytic terrain, they are also engaging themes that have appeared in philosophy, theology, and poetry since man started studying man. Indeed, Grotstein covers ground similar to that meditated on by medieval mystics; in that sense he is undertaking a theological exploration without invoking a godhead or religious creed, offering something on the order of a 'natural supernaturalism,' to borrow the title of M. H. Abrams's notable study of the romantic movement in literature. The book is very wide ranging, and reflects a great deal of reading in all these subjects. Fortunately readers will also find that it is written in a lively, fluid style that eases their journey and makes it enjoyable as well as challenging, informative, and thought provoking."

"James Grotstein is 'The Dreamer' who, in the waking state, can open all the channels of his creativity. In this book, he displays the unique turn of mind that allows him to recognize and convey an essential metaphor embedded in theory after theory-theories that, viewed in combination, explain more than each theory alone. Behind the dazzling mind-play and wit lies a deep sincerity and generosity of spirit. In his search for the numinous, mysterious 'Stranger Within Thee,' he both reaches for the stars and looks within himself and emerges firmly planted on the ground of a deeply introspective, caring clinician."

"James Grotstein's new book is one of the marvels of psychoanalytic writing. Saturated with the history of psychoanalytic ideas, Who Is the Dreamer Who Dreams the Dream? integrates countless views into a compelling vision of life. The book is full of ideas, all of which are connected by the author's passionate and intelligent grasp of theory and practice. It is deeply informative and enchanting at the same time."

"[A] compelling work of intricate, unique, and often breathtaking theory. Grotstein's ability to forge bold and unique linkages between disparate fields and traditions, his skill in uniting sophisticated philosophical perspectives with the immediacy of the clinical situation, revitalizes our appreciation of, and indeed our fascination for, even the most conventional, taken-for-granted concepts in psychoanalysis."

1. The Ineffable Nature of the Dreamer

3. A Fearful Symmetry and the Calipers of the Infinite Geometer

4. Inner Space: Its Dimensions and Its Coordinates

7. The Myth of the Labyrinth

9. Why Oedipus and Not Christ? - Part II

James M. Grotstein, M.D., is Professor of Psychiatry, UCLA School of Medicine, and a Training and Supervising Analyst at the Los Angeles Psychoanalytic Institute and at The Psychoanalytic Center of California.