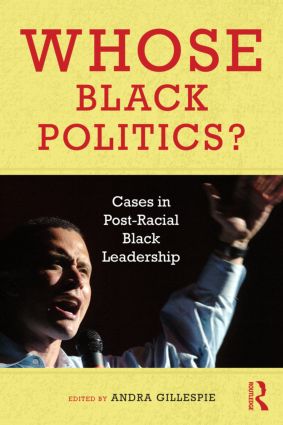 The past decade has witnessed the emergence of a new vanguard in African American political leaders. They came of age after Jim Crow segregation and the Civil Rights Movement, they were raised in integrated neighborhoods and educated in majority white institutions, and they are more likely to embrace deracialized campaign and governance strategies. Members of this new cohort, such as Cory Booker, Artur Davis, and Barack Obama, have often publicly clashed with their elders, either in campaigns or over points of policy. And because this generation did not experience codified racism, critics question whether these leaders will even serve the interests of African Americans once in office.

With these pressing concerns in mind, this volume uses multiple case studies to probe the implications of the emergence of these new leaders for the future of African American politics. Editor Andra Gillespie establishes a new theoretical framework based on the interaction of three factors: black leaders’ crossover appeal, their political ambition, and connections to the black establishment. She sheds new light on the changing dynamics not only of Black politics but of the current American political scene.

"Scholars and observers of African American politics will want to take note of this volume. Over the past decade, a new generation of African American leaders has emerged on the political landscape. With them have surfaced old and new questions about the state of black politics. This volume is one of the first works to systematically analyze these new leaders and their political styles. Professor Gillespie and her contributors offer fresh theoretical insights and a compelling framework and typology for studying this next wave of African American politicians. This book is essential reading for anyone seeking to understand the contemporary black politics and its significance for broader American politics."

"These empirically sagacious and theoretically provocative case studies are the best work yet on the transformations in African American politics that produced Barack Obama."

"Whose Black Politics is an important text that tracks a generational shift in black politics. Gillespie offers a compelling analysis of how we might understand the transition of black politicians from grassroots activists to Harvard trained attorneys. Students of black politics will learn a lot and find much to debate from Gillespie's work."