Winning with Words
The Origins and Impact of Political Framing 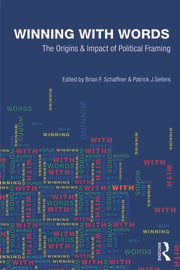 Winning with Words: The Origins and Impact of Political Framing

Today's politicians and political groups devote great attention and care to how their messages are conveyed. From policy debates in Congress to advertising on the campaign trail, they carefully choose which issues to emphasize and how to discuss them in the hope of affecting the opinions and evaluations of their target audience. This groundbreaking text brings together prominent scholars from political science, communication, and psychology in a tightly focused analysis of both the origins and the real-world impact of framing. Across the chapters, the authors discuss a broad range of contemporary issues, from taxes and health care to abortion, the death penalty, and the teaching of evolution. The chapters also illustrate the wide-ranging relevance of framing for many different contexts in American politics, including public opinion, the news media, election campaigns, parties, interest groups, Congress, the presidency, and the judiciary.

Brian F. Schaffner is associate professor of political science at the University of Massachusetts, Amherst and editor of the journal, Congress & The Presidency. He is also co-author with John Bibby of Parties, Politics, and Elections in America.

Patrick J. Sellers is professor of political science at Davidson College. He is the author of Cycles of Spin: Strategic Communication in the U.S. Congress.

"This exceptionally well-integrated collection of original essays sheds fresh light  on the many intriguing facets of the framing paradigm. Well-known experts explain what framing means and how it operates in a variety of contexts. Their analyses cover a broad range of contemporary issues that are bound to engage and excite students and professors alike."
—Doris Graber, University of Illinois at Chicago

"Schaffner and Sellers have assembled good work from leading scholars of framing. This volume mixes theoretical insights with new findings from original research, showing the broad application of framing concepts across issues and contexts. It is a useful volume for anyone interested in how framing affects citizens."
—Bruce Bimber, University of California at Santa Barbara

"This book collects nine original and innovative studies of framing in political communication. Every one offers intriguing data and insights that advance research and theory across several disciplines. Winning with Words is a winner."
—Robert M. Entman, George Washington University

"Schaffner and Sellers succeed in presenting a volume that is well focused in terms of its purpose: demonstrating the variety of applications of framing research and linking those various study emphases in one place. There is much that we still do not know about framing, but Winning with Words makes an important contribution by placing together in one volume a range of interesting framing studies and spurring further research."
—Richard Davis, Perspectives on Politics, Dec 2012, Vol. 10/No.4