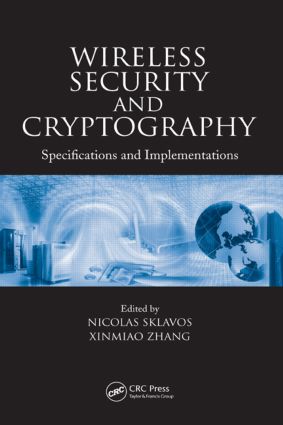 As the use of wireless devices becomes widespread, so does the need for strong and secure transport protocols. Even with this intensified need for securing systems, using cryptography does not seem to be a viable solution due to difficulties in implementation. The security layers of many wireless protocols use outdated encryption algorithms, which have proven unsuitable for hardware usage, particularly with handheld devices.

"…well organized and readable as a whole… Although some chapters describe the same security basics and algorithms, this is not a disadvantage because it allows each chapter to be read independently. … recommended for university researchers and graduate students in computer science and information systems. Also, engineers, wireless system architects, and developers will find in it interesting and useful content. For professionals, each chapter includes extensive bibliographic notes. The fact that many security aspects are widely discussed is the great advantage of this book. It allows one not only to acquire general knowledge about security specifications and implementations, but also to find out particular security solutions in different environments. In my opinion, this book is worth recommendation because it presents the current status of wireless security and describes future directions."

Overview of Cryptographic Primitives for Secure

for Wireless Security, Loai A. Tawalbeh and Cetin Kaya Koc

Security Architecture and Implementation of the Universal Mobile

Nicolas Sklavos received a Ph.D. in electrical and computer engineering and a diploma in electrical and computer engineering in 2004 and 2000, respectively, both from the Electrical and Computer Engineering Department, University of Patras, Greece. In 2005, he joined the Telecommunications Systems and Networks Department of the Technological Educational Institute of Messolonghi, Nafpaktos, Greece, where he works as an assistant professor. His research interests include security and privacy, wireless communications security, and mobile networks. He holds an award for his Ph.D. thesis on ‘‘VLSI Designs o fWireless Communications Security Systems,’’ from IFIP VLSI SOC, Germany (2003). He has also contributed to international journals and participated in the organization of conferences, as program committee and guest editor. Dr. Sklavos is a member of the IEEE, IEE, the Technical Chamber of Greece, and the Greek Electrical Engineering Society. He has authored and coauthored up to 90 scientific articles, books and book chapters, reviews, and technical reports in the areas of his research. He can be contacted at [email protected]

received B.S. and M.S. degrees in electrical engineering from Tianjin University, Tianjin, China, in 1997 and 2000, respectively. She received a Ph.D. in electrical engineering from the University of Minnesota–Twin Cities, in 2005. Since then, she has been with Case Western Reserve University, where she is currently a Timothy E. and Allison L. Schroeder Assistant Professor in the Department of Electrical Engineering and Computer Science. Her research interests include efficient VLSI architecture design for communications, cryptosystems, and digital signal processing. Dr. Zhang is the recipient of the Best Paper Award at ACM Great Lake Symposium on VLSI 2004. She also won the first prize in the Student Paper Contest at the Asilomar Conference on Signals, Systems, and Computers 2004. She is a member of the IEEE.