Wittgenstein on Thought and Will 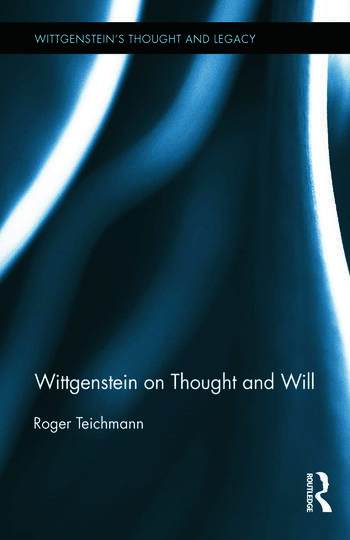 Wittgenstein on Thought and Will

This book examines in detail Ludwig Wittgenstein’s ideas on thought, thinking, will and intention, as those ideas developed over his lifetime. It also puts his ideas into context by a comparison both with preceding thinkers and with subsequent ones. The first chapter gives an account of the historical and philosophical background, discussing such thinkers as Plato, Descartes, Berkeley, Frege and Russell. The final chapter looks at the legacy of, and reactions to, Wittgenstein. These two chapters frame the central three chapters, devoted to Wittgenstein’s ideas on thought and will. Chapter 2 discusses the sense in which both thought and will represent, or are about, reality; Chapter 3 considers Wittgenstein’s critique of the picture of an "inner process", and the role that behaviour and context play in his views on thought and will; while Chapter 4 centres on the question "What sort of thing is it that thinks or wills?", in particular examining Wittgenstein’s ideas concerning the first person ("I") and concerning statements like "I am thinking" or "I intend to do X".

1. The Philosophical Context  2. Thought, Will and World  3. The Inner and the Outer  4. The Subject: Grammar vs. Metaphysics  5. Aftermath and Legacy

"This is a charming and lively book. It sustains the balance of wit, absurdity and seriousness that pervades Wittgenstein’s later thought and characterises the work of his more sensitive interpreters ... [It] provides an extraordinarily clear and useful overview of Western philosophy’s dealings with thinking and willing and will be useful to student and teacher alike." – Rachael Wiseman in the Nordic Wittgenstein Review

"[This book] would make an excellent basis for a course on Wittgenstein that wanted especially to see how Wittgenstein’s works relates to, differs from, and might correct the work of other philosophers – both those who came before him and some of the most prominent ones who have come since. This means also that it should be of interest to anyone concerned with post-Wittgensteinian analytic philosophy, especially in the areas of mind, language, and action." – Duncan Richter in the Nordic Wittgenstein Review

"The book addresses Wittgenstein’s treatment of a traditional philosophical problem. Any scholar interested in the topic of thought and intention could benefit from engaging with this book." – Alice Morelli for the British Wittgenstein Society

"Wittgenstein’s philosophy of mind is of great relevance to contemporary discussions of the subject. Recurrent misdirections and illusions have already been identified as such and corrected in his later philosophy, as contained primarily in the Philosophical Investigations. Yet regrettably, his ideas have often been misunderstood or even ignored. Teichmann’s book is an important contribution towards the correction of this sorry state. After situating Wittgenstein’s work against the background of Descartes’, Frege’s and others, Teichmann explores in depth some its central themes: the nature of thought, the apparent contrasts between inner and outer, the nature of the subject, and more. Along the way we are assisted by other philosophers who were informed by Wittgenstein’s ideas, primarily Elizabeth Anscombe, and critically assess a variety of later developments. Teichmann provides a valuable Wittgensteinian ladder for anyone wishing to climb and acquire a clear view of the issues occupying the philosophy of mind." – Hanoch Ben-Yami, Central European University, Hungary

"This is an important book – both for scholars of Wittgenstein and for philosophers looking for a profound set of answers to classical questions that arise in philosophical discussions on mind (and body), language, reality, human behavior, and our criteria for understanding ourselves, the world, and one another. Interpreting and then using Wittgenstein to answer these perennial questions—or actually to present them as new questions or as no questions at all—is an exercise in doing and teaching philosophy that is to be cherished." – Anat Biletzki, Quinnipiac University, USA