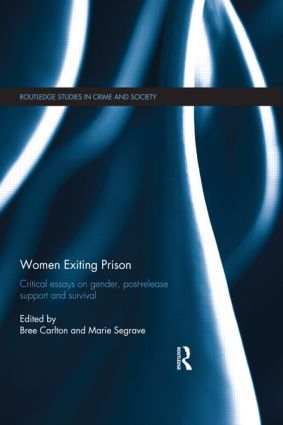 Women’s incarceration is on the rise globally and this has significant intergenerational, economic and humanitarian costs for communities across the world. While there have been efforts to implement reform, particularly in countries such as Canada, UK, US and Australia, the growing evidence suggests women’s prisons and the support structures surrounding them are in crisis.

This collection of critical essays presents groundbreaking research on women’s post-imprisonment policy, practice and experiences. It is the first collection to offer international perspectives on gender, criminalisation, the effects of imprisonment and women-centred approaches to the short and long-term support of women exiting prison. It offers cutting-edge insights into contemporary policy developments and women’s experiences across the US, the UK, Australia, Canada and Northern Ireland.

The collection makes two important contributions. First, it marks a departure from an instrumental and individual focus on ‘what works’ to reduce women’s offending and re-offending behaviour - a prevailing approach within competing collections focused on post-release issues. Second, it presents critical, original research with robust empirical foundations to revive feminist criminological engagement around gender, imprisonment, and most critically, post-release management, support and survival.

The collection will appeal to academics and community-based advocates, activists, lawyers and practitioners engaged in advocacy and service provision for imprisoned women. It is also an important and unique analysis for undergraduate and postgraduate students studying criminological and social science courses particularly those related to gender and crime, imprisonment and correctional policy and qualitative research methods.

"This excellent and overdue collection illuminates the much misunderstood and seldom examined issues impacting on women leaving prison. The book debunks the myth of rehabilitation and examines the realities of women facing the challenges of intersecting social and economic disadvantages alongside injustice and oppression. The collection, focusing on the struggles of women attempting to exit prison and survive outside, is essential reading for all those interested in women, prison and justice." - Jude McCulloch, Professor of Criminology and the Head of the School of Political and Social Inquiry, Monash Univeristy, Australia.

draws together cutting-edge research by internationally renowned authors. It calls for a new framework of understanding that entails a renewed commitment to decarceration and a reframing of the concept of ‘responsibility’ when applied to women who are already marginalised, living in poverty and victims of abuse. It exhorts researchers not to continue to service the ‘reintegration industries’ by colluding with the promotion of narrowly-focused ‘programmes’ and instead to expose the unacceptable social and economic conditions that so predictably produce the women who constitute the majority of the female prison population in all countries. The editors are to be congratulated on producing a collection that really does say something new and stands out in a crowded market." - Anne Worrall, Professor of Criminology and Director of the Centre for Criminological Research, University of Keele

"This engaging collection of essays is a welcome contribution to feminist criminology and to our understanding of the impact of prison on women. Drawing together scholars from around the world, the editors have produced a high calibre publication that moves ahead many debates about punishment and prisoner re-entry. Evenly balanced between empirical and theoretical debate, the essays seek to ameliorate and challenge current practice. This link to activism and the evident commitment contributors have to the community of women affected by the criminal justice policies offers a renewed and compelling vision of radical criminology at a time when much of the field has seemingly drifted from political engagement." - Mary Bosworth, Professor of Criminology at the University of Oxford and Monash University.

"The book powerfully illustrates the way in which systems of criminalisation impact on women and the harmful effects of this for women and communities. Contributors provide rigorous accounts of the way in which well-intentioned reforms become distorted in the process of implementation and operation, as a result of the dominance of neoliberal social forms and the punitive pull centred on the prison." - Margaret S. Malloch, University of Stirling

Bree Carlton is a Senior Lecturer in Criminology at Monash University, Australia. She has undertaken research and published widely in the areas of history and prison studies. Her book, Imprisoning Resistance: Life and Death in an Australian Supermax, was published by the Sydney Institute of Criminology Series in 2007 and nominated in the True Crime category of the 8th Davitt Awards in 2008. Her collaborative research with Marie Segrave has focused on gender, imprisonment and post-release survival while her current research program has extended to focus on penal reform and abolition.

Marie Segrave is a Senior Lecturer in Criminology in the School of Political and Social Inquiry at Monash University, Australia. Marie researches and publishes across a range of feminist and critical criminological concerns including human trafficking, labour exploitation and migration, and post-imprisonment. She is co-author of Sex Trafficking: International context and response (Routledge 2009) Her collaborative research with Bree Carlton on women’s survival post-imprisonment has been published widely, including journals such as Punishment and Society and the Australian and New Zealand Journal of Criminology.