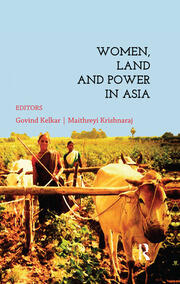 Across the world women constitute an integral part of the agricultural sector. This volume is based on feminist responses to farming women’s struggle for economic rights and social justice in Asia, and seeks to provide a greater understanding of the development consequences of women’s marginal, limited ownership rights to land and other productive assets.

Using comprehensive analyses, quantitative and qualitative data, and case studies from India, China, Bangladesh, Bhutan, Nepal, and other countries of the Asia-Pacific region, this volume brings together scholars and activists engaged with women’s unmediated entitlement to land and productive assets. While generally taking a position in favour of asset redistribution, the volume addresses two major issues: first, the conflict between legal measures and socio-cultural norms, in a context where laws that seek to secure gender equality and women’s economic empowerment are often overruled by norms that favour men; and second, how changes in the global economy in relation to traditional farming practices have adversely impacted women’s rights, especially in regions where they previously enjoyed more customary rights in asset control and management. The book draws attention to issues of economic security, gender equitable access to resources and asset-building, human rights and law, land-based livelihoods, caste and ethnic diversity, and voices in the women’s movements.

This book will be useful to policy makers, civil society organisations, researchers and students of gender and women’s studies, development studies, sociology, economics and agriculture.