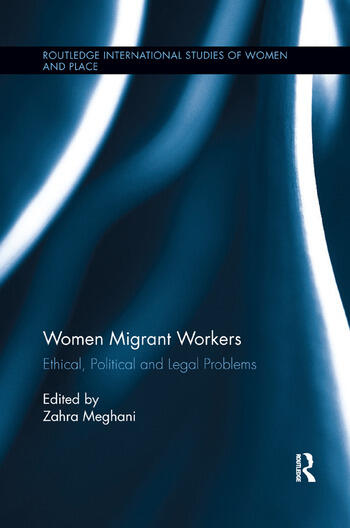 This volume makes the case for the fair treatment of female migrant workers from the global South who are employed in wealthy liberal democracies as care workers, domestic workers, home health workers, and farm workers. An international panel of contributors provide analyses of the ethical, political, and legal harms suffered by female migrant workers, based on empirical data and case studies, along with original and sophisticated analyses of the complex of systemic, structural factors responsible for the harms experienced by women migrant workers. The book also proposes realistic and original solutions to the problem of the unjust treatment of women migrant workers, such as social security systems that are transnational and tailored to meet the particular needs of different groups of international migrant workers.

Zahra Meghani is an Associate Professor of Philosophy at the University of Rhode Island.

“This volume makes a rich and innovative contribution to the literature on an important and timely topic: Gender, migration, and work. It looks in particular at low-skilled female migrant workers from the global South, migrating to countries of the global North. … The individual chapters of the volume paint a multifaceted picture of the realities of low-skilled WMWs (women migrant workers) —particularly migrant domestic and care workers—in a wide range of sending and receiving states, and the numerous challenges and rights violations they encounter. Despite the wide geographic scope of the book, the situation and difficulties of WMWs in the various sending and receiving states are surprisingly similar. The themes covered by the book (legal regulation, international development paradigms, social security, support services for WMWs, and directions for future research), are well-chosen.” – Feminist Legal Studies (Springer) May 2016

“The analyses offered in this book are multidisciplinary and international and are informed by data and case studies that document and explore the systemic and structural mistreatment women migrant workers from the global south experience in wealthy liberal democracies where they are employed… Women Migrant Workers puts forward a compelling case for the immediate reform of immigration and employment laws and policies in receiving nations so that women migrant workers from the global south employed in so-called low-skilled, low-waged occupations or undocumented workers are not subject to discrimination and marginalization. The book convincingly highlights the flaws in the neoliberal development paradigm and its model of social security...  This collection should be read by any researcher, human rights practitioner, and policy analyst interested in accounting for gender, class, ethnic, and cultural diversity in the reforms to immigration and labour laws and policies." - Border Criminologies (Contreras) October 2016

"Zahra Meghani’s edited volume, Women Migrant Workers, makes a solid and timely contribution to current debates on migration and development, by bringing to the fore the ethical, political, and legal challenges facing governments responsible for safeguarding the rights of migrants. Building on earlier literature in the field of gender and migration, including the feminisation of migration, transnational families, global care chains, and remittances, Women Migrant Workers takes the field in a direction it needs to go by seeing women as workers, adding nationalism to its intersectional look at oppression, emphasising rights, examining policy impacts, and arguing for greater accountability of labour-sending and labour-receiving states... Women Migrant Workers will be of interest to academics from a variety of disciplines who are studying migration (philosophy, political science, economics, sociology, anthropology, law, international relations, history, geography, gender studies, development studies, labour studies), and most especially those with a thematic interest in gender, human and labour rights, globalisation, and neoliberalism. It will also be of relevance to policymakers and civil society activists working to defend migrants’ rights, as most chapters offer concrete policy recommendations for state and non-state actors alike." - Gender & Development (Petrozziello) October 2016