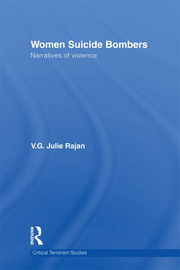 This book offers an evaluation of female suicide bombers through postcolonial, Third World, feminist, and human-rights framework, drawing on case studies from conflicts in Palestine, Sri Lanka, and Chechnya, among others.

Women Suicide Bombers explores why cultural, media and political reports from various geographies present different information about and portraits of the same women suicide bombers. The majority of Western media and sovereign states engaged in wars against groups deploying bombings tend to focus on women bombers' abnormal mental conditions; their physicality-for example, their painted fingernails or their beautiful eyes; their sexualities; and the various ways in which they have been victimized by their backward Third World cultures, especially by "Islam." In contrast, propaganda produced by rebel groups deploying women bombers, cultures supporting those campaigns, and governments of those nations at war with sovereign states and Western nations tend to project women bombers as mythical heroes, in ways that supersedes the martyrdom operations of male bombers.

Many of the books published on this phenomenon have revealed interesting ways to read women bombers' subjectivities, but do not explore the phenomenon of women bombers both inside and outside of their militant activities, or against the patriarchal, Orientalist, and Western feminist cultural and theoretical frameworks that label female bombers primarily as victims of backward cultures. In contrast, this book offers a corrective lens to the existing discourse, and encourages a more balanced evaluation of women bombers in contemporary conflict.

This book will be of interest to students of terrorism, gender studies and security studies in general.

Introduction: The Phenomenon of Women Bombers  1. Mad, Suicidal, and Mentally Challenged  2. The Female Body: Sexuality, Disease, and Contagion  3. ‘The Woman Question’: Women Bombers as Victims  4. Fabricating the Female Martyr: The Palestinian Case  5. Mothers and the Nation

V.G. Julie Rajan is Visiting Assistant Professor at Rutgers University in Women's and Gender Studies, and has a PhD in Comparative Literature.

'This is an in-depth, original analysis of the phenomenon of women as terrorists. Rajan explores her subject in a truly interdisciplinary manner. She relies on the most recent sophisticated attempts to think about transnational feminism and feminist theory, but she also brilliantly brings to bear upon the subject a complex psychoanalytical framework which explores different stereotypes of women, such as victims, martyrs, and mother of the nation. This book will be an extremely important resource.' - Drucilla Cornell, Professor of Political Science, Women's Studies, and Comparative Literature at Rutgers University.

'A fascinating study that takes us across four continents, Women Suicide Bombers offers a refreshing perspective on disparate and controversial representations of women suicide bombers. It leads the reader through the labyrinth of the mass media, rebel communiqués and popular culture narratives and succeeds in reconstructing these women as active militants negotiating violence, instead of as pathological victims. A must read that makes in invaluable contribution to the literature on women in war, global terrorism, human rights and anti-colonial movements.'- Charlotte Bunch, Founding Director of the Center for Women’s Global Leadership and Distinguished Professor in Women’s and Gender Studies, Rutgers University