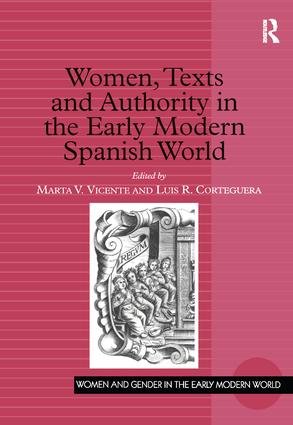 Women, Texts and Authority in the Early Modern Spanish World

This is the first essay collection to examine the relation between text and gender in Spain from a broad geographical, social and cultural perspective covering more than 300 years. The contributors examine women and the construction of gender thematically, dealing with the areas of politics, law, religion, sexuality, literature and economics, and in a variety of social categories, from Christians and Moriscas, queens and merchants, peasants and visionaries, heretics and madwomen. The essays cover different regions in the Spanish monarchy, including Andalusia, Aragon, Castile, Catalonia, Valencia and Spanish America, from the fifteenth century through to the eighteenth century. Women, Texts and Authority in Early Modern Spain focuses on two central themes: gender relations in the shaping of family and community life, and women's authority in spheres of power. The representation of women in a variety of texts such as poetry, court cases, or even account books illustrate the multifaceted world in which women lived, constantly choosing and negotiating their identities. The appeal of this collection is not limited to scholars of Spanish history and literature; it is deliberately designed to address the issue of how gender relations were constructed in the formation of modern society, and therefore will be of interest to scholars of women's and gender history generally. Because of the emphasis on how this construction occurs in texts, the collection will also be attractive to scholars interested in literary studies and/or print culture.

'These essays harken to previously unheard voices in early modern Spain and shed new light on familiar texts. The authors expand our understanding of presence and power in important ways. Their studies present women of high class and those of less privilege, from the dominant group as well as the marginalized, the professional religious and those of other walks of life.' Elizabeth Rhodes, Associate Professor of Hispanic Studies, Boston College 'Based on extensive archival research and close readings of both familiar and little-known documents, this collection looks at women from a broad spectrum of ethnic, social, and geographic backgrounds … Scholars of the early modern Hispanic and European world owe a debt to Vicente and Corteguera for contributing greatly to our understanding of women's roles, actions, and voice.' Magdalena S. SÃ¡nchez, author of The Empress, the Queen, and the Nun '… this intelligent and useful volume…' Sixteenth Century Journal

Marta V. Vicente is Assistant Professor of Women's Studies and History at the University of Kansas. She is the author of several articles on women and family work in Early Modern Spain. She is completing a book titled Clothing the Spanish Empire: Families and the Calico Trade in the Atlantic World,1700-1815. Luis R. Corteguera is Associate Professor of History at the University of Kansas. He is the author of For the Common Good: Popular Politics in Barcelona, 1580-1640 (2002). His next book project is Before God and King: Ordinary People in Politics in Early Modern Spain.