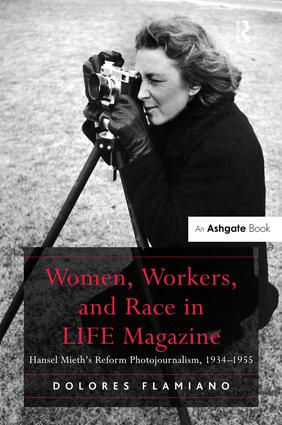 The tension between social reform photography and photojournalism is examined through this study of the life and work of German émigré Hansel Mieth (1909-1998), who made an unlikely journey from migrant farm worker to Life photographer. She was the second woman in that role, after Margaret Bourke-White. Unlike her colleagues, Mieth was a working-class reformer with a deep disdain for Life's conservatism and commercialism. In fact, her work often subverted Life's typical representations of women, workers, and minorities. Some of her most compelling photo essays used skillful visual storytelling to offer fresh views on controversial topics: birth control, vivisection, labor unions, and Japanese American internment during the Second World War. Her dual role as reformer and photojournalist made her a desirable commodity at Life in the late 1930s and early 40s, but this role became untenable in Cold War America, when her career was cut short. Today Mieth's life and photographs stand as compelling reminders of the vital yet overlooked role of immigrant women in twentieth-century photojournalism. Women, Workers, and Race in LIFE Magazine draws upon a rich array of primary sources, including Mieth's unpublished memoir, oral histories, and labor archives. The book seeks to unravel and understand the multi-layered, often contested stories of the photographer's life and work. It will be of interest to scholars of photography history, women's studies, visual culture, and media history.

'Flamiano’s book is strongly and clearly written and thoroughly researched. Flamiano has added necessary depth to an important contributor to photojournalism and furthered understanding of the external forces that shape how a photographer’s work is created and viewed. The information in this book can be a valuable addition to journalism history classes.'

'Working from the standpoints of both biography and journalism history, Flamiano effectively articulates the challenges Mieth faced, emphasizing in particular the risks of working for a major news and entertainment magazine that had to please advertisers as well as the public. By positioning Mieth as a professional who sought, not always successfully, to resist the racial and gendered oppression that was condoned by LIFE’s editors and administrators, and exploring her unwarranted oppression by the FBI, Flamiano’s study contributes a unique perspective on her career and values.'

'Dolores Flamiano highlights the boundaries and borders Mieth continually encountered and often crossed: gender, nationality, class, and race. An in-depth cultural exploration of Mieth’s photographs, buttressed by her unpublished memoir and oral histories, the book raises questions about gender, documentary versus photojournalism, and the power of the photojournalist (versus the power of magazine editors) to frame a story.'

--The Journal of Magazine Media

'This work effectively highlights the many challenges faced by women and immigrants in the United States during the pre- and post-World War II era, and though it is framed as a biography of Hansel Mieth, Flamiano’s text presents insight into the instances of sexism, racism, and right-leaning social and economic practices within popular news magazines like LIFE and society at large.'

'Dolores Flamiano's timely analysis of this under-appreciated photographer benefits from lively narratives and marvelous illustrative photographs. Her book functions as a key reference text for anyone interested in the histories of labor in photography, women in photography, or magazine photography.'

'LIFE magazine dominated the Golden Age of Photojournalism in the 20th Century and few women could break into that famous boys' club. Hansel Mieth's career is overshadowed by headline-grabbing Margaret Bourke-White and Dorothea Lange, but Dolores Flamiano digs deep to reveal the highs and lows of this determined émigrée photographer. Flamiano allows us to appreciate a principled woman who was ahead of her time.'

'Dolores Flamiano's thorough and revelatory look at Hansel Mieth's life and work provides a necessary new chapter in our understanding of the documentary tradition. Mieth, from her beginnings as a farm worker to a documentary photographer of labor to her later work in journalism and social movements, is a powerful way to understand the evolution of documentary through the 20th century. Knowing her life as an immigrant, the many "migrations" she made once in the United States, and her own personal struggles provides an important backdrop to understanding the aesthetic power and empathy of her imagery. Hansel Mieth deserves a careful, in-depth look, and Flamiano's fine book is essential in that viewing.'

'Dolores Flamiano's meticulous historical scholarship tells and shows the story of a courageous and tenacious photojournalist dedicated to exploring the social contradictions of mid-20th century America. Especially revealing is Flamiano's analysis of Hansel Mieth's work as a "pioneer in participant-observer social documentary photography".'

Table of Contents to come