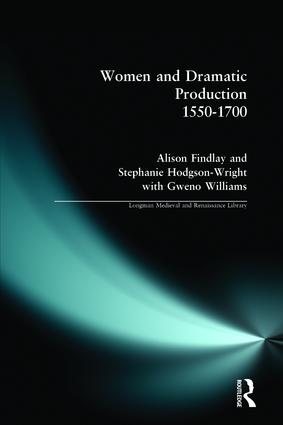 There is a traditional view that women were absent from the field of dramatic production in the early modern period because of their exclusion from professional theatre. Women and Dramatic Production 1550-1700 challenges this view and breaks new ground in arguing that, far from writing in closeted retreat, a select number of women took an active part in directing and controlling dramatic self-representations.

Examining texts from the mid-sixteenth century through to the end of the seventeenth, the chapters trace the development of a women-centred aesthetic in a variety of dramatic forms. Plays by noblewomen such as Mary Sidney, Elizabeth Cary, Mary Wroth, Rachel Fane and the women of the Cavendish family, form an alternative dramatic tradition centred on the household. The powerful directorial and performative roles played by queens in royal progresses and masques are explored as examples of women's dramatic production in the royal court.

The book also highlights women's performances in alternative venues, such as the courtroom and the pulpit, arguing that the practices of martyrs like Margaret Clitherow or visionaries like Anna Trapnel call into question traditional definitions of theatre. The challenges faced by women who were admitted to the professional theatre companies after 1660 are explored in two chapters which deal with the plays of Katherine Philips, Elizabeth Polwhele, Aphra Behn, and Mary Pix, among others.

By considering the theatrical dimensions of a wide range of early modern women's writing, this book reveals the breathtaking panorama of women's dramatic production and will be essential reading for students of women's writing and renaissance drama.

Alison Findlay is a Senior Lecturer in the Department of English, Lancaster University.

Stephanie Hodgson-Wright is a Senior Lecturer in the School of Humanities and Social Sciences, University of Sunderland.

Gweno Williams is a Senior Lecturer in the School of Literature Studies, University College of Ripon and York St. John.