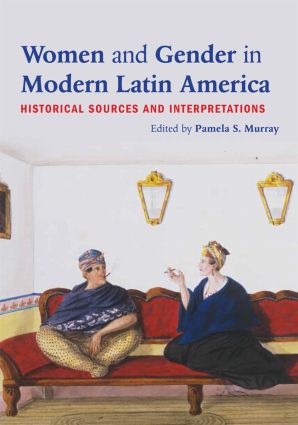 In Latin American history, women have not only played key roles within the family and society, but have long been active participants in political and economic life. The explosion of research over the last fifteen years testifies to how much we still have to learn about their experiences. Women and Gender in Modern Latin America brings together selections from recent scholarship with excerpts from an exciting array of primary sources, many translated into English for the first time, to bring the story of women’s involvement in modern Latin American history up to date.

Covering major developments in the region from the bitter wars of Spanish American independence (1810-1825) through the turn of the twenty-first century, this collection examines the expectations, responsibilities, and limitations that have confronted women in their varied roles. The book explores:

In the concise introductory essays, Pamela S. Murray synthesizes recent research to provide readers with a context for the selections in each chapter, including primary sources that range from trial records, legal codes, and other official documents to personal letters, excerpts from women’s published writings, speeches, and images.

An exciting new anthology, this engaging classroom resource goes far beyond previous collections by showing that women had a history that was not apart from men but related to them, especially in power relationships. Insurgents, workers, reformers, feminists, revolutionaries, mothers, and grandmothers, across the social and ethnic spectrum, speak in their own words.

In Women and Gender in Modern Latin America, Pamela Murray skilfully weaves together primary and secondary sources to provide us with a sorely needed and highly innovative text. Along with familiar and fundamental readings, the text brings to life exciting new voices that challenge conventional stereotypes. The excellent selection of readings and inventive format will not only encourage lively and stimulating discussion but also foster critical thinking in the classroom. I, for one, am looking forward to using this unique text in my course.

– Francie Chassen-Lopez, author of From Liberal to Revolutionary Oaxaca: The View from the South, Mexico 1867-1911

Those of us who teach the history of women and gender in Latin America have needed this book for a long time. Pamela Murray has paired engaging and accessible primary materials with supporting secondary literature representing both the classical writings and the latest historiography in the field. I look forward to using it in my classes.

– Christine Ehrick, author of The Shield of the Weak: Feminism and the State in Uruguay, 1903-1933

Chapter 5: Economic Modernization and the Gendered Division of Labor, c. 1900-1970

Pamela S. Murray is Professor of History at the University of Alabama at Birmingham. She is the author of For Glory and Bolívar: The Remarkable Life of Manuela Sáenz and Dreams of Development: Colombia’s National School of Mines and its Engineers, 1887-1970.