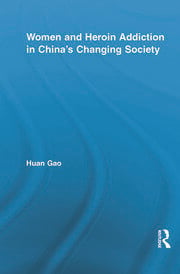 Accompanying China’s economic reform and open-door policy in 1978, illicit drug use emerged in the late 1980s, and gradually developed into a serious social problem. Heroin was the dominant illicit drug consumed in the new drug epidemic, and the number of female heroin users has increased rapidly in the country. While heroin use in China is soaring, little is known about women’s heroin use in the context of China’s rapidly changing society.

This groundbreaking book has important policy implications for both China and the international society in the context of increasing global concern about women’s substance abuse.

1. Social Changes and Illicit Drug Use in China  2. Reaching Out to Women Subjects  3. Family, School and Post-School Life  4. Initiation into Heroin  5. Continued Use and Crime  6. Desistance  7. Conclusions and Policy Implications.  Epilogue.

"With photographs and data from field observations and in-depth interviews, Gao’s book on women and heroin addiction in China has opened up a new research area for other scholars to further explore. This timely book is very well written and is in fact one of a kind in the literature in that it applies the most advanced Western research methods to the study of Chinese issues."

"The author must be commended on completing a research project about a hidden population – heroin addicted women in China. Through this work, the author has given a voice to women who are often silenced."

"Women and drugs, not uncommon dancing partners, re-engaged in a new tango in the Post-Deng China following its Open Door Policy in the 1980s. The shut door in the city of Kunming was kept ajar through the author’s personal connections. She interviewed 90 women heroin users through snow-ball techniques in 2005, in various locations including dance halls, nightclubs, brothels, drug-selling spots. Based on their personal experiences, recounting their important life events, and a follow-up study with some of the women in 2008, the findings depicted a new epidemic boom of drugs, sex and crime alongside the economic and social development of the new China."