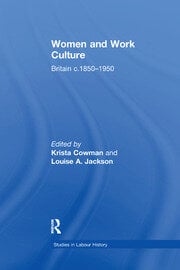 Women's work has proved to be an important and lively subject of debate for historians. An earlier focus on the pay, conditions and occupational opportunities of predominantly blue-collar working-class women has now been joined by an interest in other social groups (white-collar workers, clerical workers and professionals) as well as in the cultural practices of the work place, reflecting in part the recent 'cultural turn' in historical methodology. Although the term 'culture' is debated and contested, this volume reflects this diversity, addressing a variety of interpretations. The individual essays address such issues as how women have created occupational and professional identities, negotiated masculine working practices (cultural, legal and institutional) and created their own 'feminine' environments. They also examine the integration of paid work with domestic responsibilities, the concept of 'career' for women, and the construction and representation of women's work within the wider cultural landscape.' By focusing on the experiences of British women between c.1850 and 1950, the collection vividly demonstrates that the association of 'work' with paid labour is problematic and that the categories of 'work', 'leisure' and 'consumption' must be viewed as overlapping and inter-linked rather than as separate entities. Furthermore, it highlights the ways in which the concept of gender operated as an organising principle in the construction and negotiation of identities and practices in British society.

Contents: Introduction: Women's work, a cultural history, Krista Cowman and Louise A. Jackson. Part I What Do We Mean by Work?: Victorian liberal feminism and the 'idea' of work, Joyce Senders Pedersen; Religion and the meanings of work: four cases from among the bright circle of women Quakers, Sandra Stanley Holton; Good housekeeping: professionalising the housewife, 1920-50, Judy Giles. Part II Factory Labour: 'Women of true respectability?' Investigating the London work-girl, 1880-1900, Emma Liggins; 'It was just a real camaraderie thing': socialising, socialisation and shopfloor culture at the Rowntree factory, York, Emma Robertson. Part III Youth: 'You'd the feeling you wanted to help': young women, employment and the family in inter-war England, Selina Todd; 'Be yourself': Girl and the business of growing up in late 1950s England, Stephanie Spencer. Part IV Science and Medicine: 'Union is strength': the medical women's federation and the politics of professionalism, 1917-30, Kaarin Michaelsen; The laboratory: a suitable place for a woman? Gender and laboratory culture around 1900, Claire Jones. Part V Women and War: All quiet on the Woolwich front? Literary and cultural constructions of women munitions workers in the First World War, Angela K. Smith; Eve in khaki: women working with the British military, 1915-18, Lucy Noakes; 'Singing while England is burning': women musicians as working music travellers in wartime Britain, 1940-43, David Sheridan. Index.

Dr Krista Cowman, The School of Cultural Studies at Leeds Metropolitan University, UK and Dr Louise A. Jackson, School of History and Classics, The University of Edinburgh, UK

’... Cowman and Jackson use the edited collection format to its best advantage with essays that address common themes and issues, while at the same time providing a sampling of the richness and diversity of the scholarship being done in the broad field of the cultural history of women's work in Britain. Their useful introduction and clear organization help to draw out the common threads running through each of the essays... Women and Work Culture is a valuable addition to the Studies in Labour History Series... In addition to being a useful teaching tool, the collection will also be of great interest to researchers in labour and women's history, as well as a variety of other sub-fields in British history.’ Labour/Le Travail