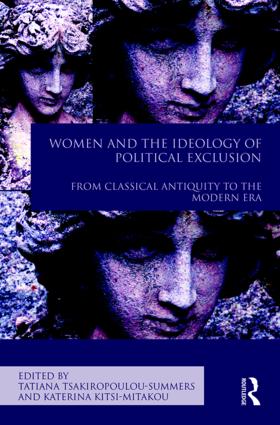 Women and the Ideology of Political Exclusion

From Classical Antiquity to the Modern Era, 1st Edition

Women and the Ideology of Political Exclusion explores the origin and evolution of the political ideology that has kept women away from centers of political power – from the birth of democracy in ancient Athens to the modern era. In this period of 2500 years, two parallel tracks advanced: while male authority tried to construct an ideology that justified women’s incompatibility with the political organization of the state, women attempted to resist their exclusion and thwart arguments about their inferiority.

Although the issue of women’s status has been studied in detail in specific eras, this interdisciplinary collection extends the boundaries of the discussion. Drawing on a wide range of literary and historical sources, including Herodotus’ Histories, Plato’s Laws, María de San José’s Oaxaca Manuscript,and the work of Émilie Du Châtelet, Mary Boykin Chesnut, and Virginia Woolf, the chapters here reveal the various manifestations of the female-inferiority construct. Such an extensive overview of this historical trajectory promotes a deeper understanding of its causes, permutations, and persistence.

Women may have made great gains toward political power, but they continue to encounter invisible barriers, raised by traditional stereotypes, that block their path to success. Women and the Ideology of Political Exclusion aims to make these barriers visible, raising awareness about the longevity and tenacity of arguments, the roots of which reach classical antiquity.