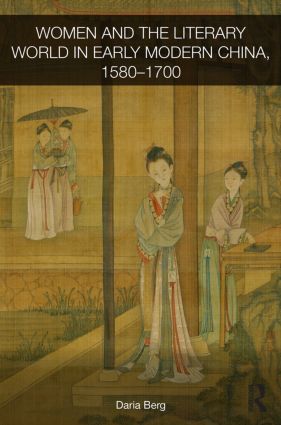 Exploring the works of key women writers within their cultural, artistic and socio-political contexts, this book considers changes in the perception of women in early modern China. The sixteenth century brought rapid developments in technology, commerce and the publishing industry that saw women emerging in new roles as both consumers and producers of culture. This book examines the place of women in the cultural elite and in society more generally, reconstructing examples of particular women’s personal experiences, and retracing the changing roles of women from the late Ming to the early Qing era (1580-1700). Providing rich detail of exceptionally fine, interesting and engaging literary works, this book opens fascinating new windows onto the lives, dreams, nightmares, anxieties and desires of the authors and the world out of which they emerged.

Daria Berg is Chair Professor (Ordinaria) of Chinese Culture and Society and Director of the Asia Research Centre at the University of St. Gallen, Switzerland. She has published extensively on Chinese literature, popular culture and cultural history, including Carnival in China: A Reading of the Xingshi yinyuan zhuan. She edited Reading China: Fiction, History and the Dynamics of Discourse. Essays in Honour of Professor Glen Dudbridge, and co-edited The Quest for Gentility in China: Negotiations Beyond Gender And Class.

Routledge Studies in the Early History of Asia

The aim of this series is to publish original, high-quality work by both new and established scholars in the West and the East, on all aspects of the early history of Asia.