Women and the Material Culture of Needlework and Textiles, 1750–1950 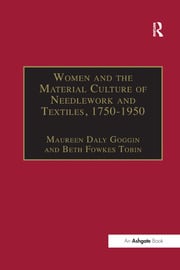 Women and the Material Culture of Needlework and Textiles, 1750–1950

Rejecting traditional notions of what constitutes art, this book brings together essays on a variety of fiber arts to recoup women's artistic practices by redefining what counts as art. Although scholars over the last twenty years have turned their attention to fiber arts, redefining the conditions, practices, and products as art, there is still much work to be done to deconstruct the stubborn patriarchal art/craft binary. With essays on a range of fiber art practices, including embroidery, knitting, crocheting, machine stitching, rug making, weaving, and quilting, this collection contributes to the ongoing scholarly redefinition of women's relationship to creative activity. Focusing on women as producers of cultural products and creators of social value, the contributors treat women as active subjects and problematize their material practices and artifacts in the complex world of textiles. Each essay also examines the ways in which needlework both performs gender and, in turn, constructs gender. Moreover, in concentrating on and theorizing material practices of textiles, these essays reorient the study of fiber arts towards a focus on process”the making of the object, including the conditions under which it was made, by whom, and for what purpose”as a way to rethink the fiber arts as social praxis.

Maureen Daly Goggin is Associate Chair in the Department of English at Arizona State University, USA. Beth Fowkes Tobin is Professor of English and Women's Studies at the University of Georgia, USA.