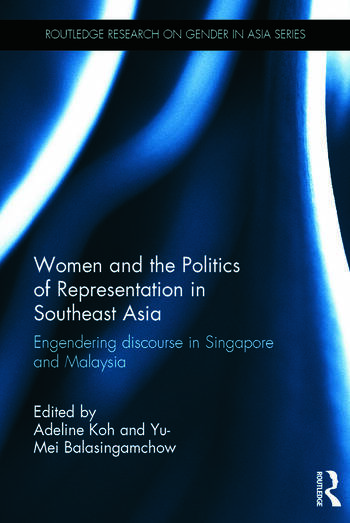 Women and the Politics of Representation in Southeast Asia: Engendering discourse in Singapore and Malaysia

Singapore and Malaysia are rapidly modernising, globalising Asian states which, although being distinct nations since 1965, share common elements in the on-going struggle over the meaning of gender and sexuality in their societies. This is the first book to discuss a range of discourses around gender in these two countries.

Women and the Politics of Representation in Southeast Asia:

Engendering Discourse in Singapore and Malaysia seeks to give an overview of how gender and representation come together in various configurations in the history and contemporary culture of both nations. It examines the discursive construction of gender, sexuality and representation in a variety of areas, including the politics of everyday life, education, popular culture, literature, film, theatre and photography. Chapters examine a range of tropes such as the Orientalist "Sarong Party Girl," the iconic "Singapore Girl" of Singapore Airlines, and the figure of pious Muslim femininity celebrated by Malaysian NGO IMAN, all of which play important roles in delineating limitations for gender roles. The collection also draws attention to resistance to these gender boundaries in theatre, film, blogs and social media, and pedagogy.

Bringing together research from a variety of humanistic and social science fields, such as film, material culture, semiotics, literature and pedagogy, the book is a comprehensive feminist survey that will be of use for students and scholars of Women’s Studies and Asian Studies, as well as on courses on gender, media and popular culture in Asia.

Yu-Mei Balasingamchow is a writer and independent scholar in Singapore. She is the co-author of Singapore: A Biography, which was named a Choice Outstanding Academic Title 2010. Her research interests are in history and social memory, gender, urbanism and cultural politics.

is Associate Professor of Postcolonial Literature and director of [email protected], a digital humanities centre at Richard Stockton College, America. She works and publishes on the intersections of race, postcolonial studies, global feminisms and the digital humanities.