Women as Political Leaders
Studies in Gender and Governing 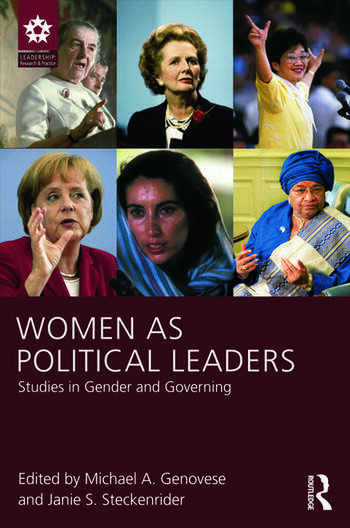 Women as Political Leaders: Studies in Gender and Governing

Over the past several years, the fields of Leadership Studies and of Women's Studies have grown tremendously.  This book, which is a series of case studies of women who have headed governments across the globe, will discuss the conditions and situations under which women rose to power and give a brief biography of each woman .   A special chapter on why no U.S. woman has risen to the top,  and a review of the political campaigns of Hillary Clinton, Michele Bachmann and others  will be included. This book will be of interest for courses in women and leadership, global politics and gender studies.

Michael A. Genovese holds the Loyola Chair of Leadership and is Professor of Political Science at Loyola Marymount University, where he directs the Institute for Leadership Studies. Genovese is the author of over 30 books, including (with Thomas E. Cronin) Leadership Matters: Unleashing the Power of Paradox (2012) and A Presidential Nation: Causes, Consequences, and Cures (2013).

Janie S. Steckenrider is Associate Professor of Political Science at Loyola Marymount University and focuses on the areas of gender politics and political gerontology. She is the coauthor (with Tonya Parrott) of New Directions in Old Age Policies. Her work has been published in the Journal of Women and Politics, Journal of Health and Human Services Administration, Southwest Journal of Aging, and Journal of Alzheimer’s Disease.

"Genovese and Steckenrider expand and update Genovese's 1993 Women as National Leaders, which investigated women as political leaders and their pathways to office, leadership styles, and performance acheivements. Here the editors include the question of how much has changed in two decades. Well-known scholars offer case-study chapters on women leaders in the Phillipines, Norway, Pakistan, Nicaragua, India, Israel, Liberia, Germany, Angentina and England. What women have in common is that "they have made it to the top despite significant gender bias"... Summing Up: Recommended"- K. Staudt, University of Texas at El Paso, for CHOICE, November 2013

"Genovese and Steckenrider provide a timely and important look at the women who have held top political positions around the world while at the same time asking the important question, "when will America elect its first woman president?" In answering that question, this book takes a critical look at how women are defined as leaders based on gender, and more importantly, why that matters for women pursuing top political leadership positions in the United States and other countries as well."--Lori Cox Han, PhD, Professor of Political Science, Chapman University, Orange, CA

Genovese and Steckenrider weave together a wide-ranging collection of cases to shed light on the manner in which context, biography, leadership, and performance intersect with gender, as well as how these dynamics vary cross-culturally and cross-nationally.  This is a must read for scholars and students interested in the growing number of female heads of state.  And it is a stark reminder of how far we remain from true gender parity in political institutions across the globe.--Jennifer L. Lawless, Associate Professor of Government and Director of the Women & Politics Institute, American University

These timely and important essays contain fascinating and genuine insights. The determinative importance of context in the rise to power, family background, the range of leadership styles shown and the diversity of policies pursued by women leaders such as Benazir Bhutto, Indira Ghandi, Golda Meir, Angela Merkel, Margaret Thatcher and others are critically assessed. The result is intelligent scholarship of distinction.--Professor Angus Hawkins FRHistS, Oxford University