Women in Early Modern Polish Society, Against the European Background 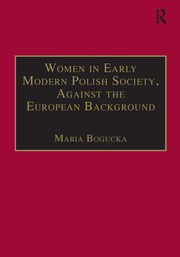 Women in Early Modern Polish Society, Against the European Background

While far fewer studies on women and gender have been published in Poland than in the West, the last decade has seen growing interest in gender history among Polish scholars. The first general history of Polish women in the early modern times was published by Dr. Bogucka in Polish in 1998; the present study constitutes an expansion, as well as a translation into English, of that seminal work. Women in Early Modern Polish Society, against the European Background makes widely available to historians and women's studies scholars in the West a mass of information about women in Poland from the 16th to the 18th century, previously inaccessible in Polish archives. In the preface, Bogucka points to the need for theoretical reflection within Polish studies of women's history, and the need to develop standard concepts and terms for the study of gender, to allow this research to develop further. She emphasizes that scholars of women's history must rely on all documents of a given epoch if they want to examine women's lives. Urban and rural records (especially law court records), church archives, private archives, diaries, noblemen's records, collections of sermons, last wills, inventories, belles letters, correspondence, are all sources which always contain scattered direct or indirect information on women and gender relations. Bogucka examines the stages of the typical woman's life-girl, married woman, widow-discussing their position in the family and society, as well as the societal changes that occurred in this sphere from the sixteenth to the eighteenth century. She also looks, among other things, at the role of women's work in the countryside and in towns according to social status and education; religious life, which offered possibilities to women to appear and to act outside the home; the impact of Reformation on the situation of women; the participation of women in the creation and consumption of culture; and women's roles in political life. Finally, she places her discussion of Polish women in comparative context, exploring the legal status and general situation of women in Poland against those in Western countries - Germany, France and England - as well as Central and Eastern Europe-Hungary, Bohemia, and Russia.

'The work is interesting, informative and written in a style that makes it highly accessible, a very welcome addtion ot the study of Early Modern history and is highly recommendable for all Early Modern scholars.' Parergon