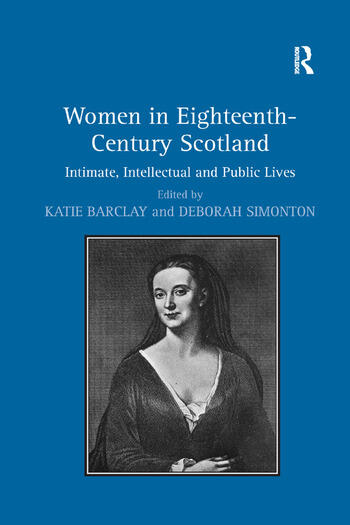 The eighteenth century looms large in the Scottish imagination. It is a century that saw the doubling of the population, rapid urbanisation, industrial growth, the political Union of 1707, the Jacobite Rebellions and the Enlightenment - events that were intrinsic to the creation of the modern nation and to putting Scotland on the international map. The impact of the era on modern Scotland can be seen in the numerous buildings named after the luminaries of the period - Adam Smith, David Hume, William Robertson - the endorsement of Robert Burns as the national poet/hero, the preservation of the Culloden battlefield as a tourist attraction, and the physical geographies of its major towns. Yet, while it is a century that remains central to modern constructions of national identity, it is a period associated with men. Until recently, the history of women in eighteenth-century Scotland, with perhaps the honourable exception of Flora McDonald, remained unwritten. Over the last decade however, research on women and gender in Scotland has flourished and we have an increasingly full picture of women's lives at all social levels across the century. As a result, this is an appropriate moment to reflect on what we know about Scottish women during the eighteenth century, to ask how their history affects the traditional narratives of the period, and to reflect on the implications for a national history of Scotland and Scottish identity. Divided into three sections, covering women's intimate, intellectual and public lives, this interdisciplinary volume offers articles on women's work, criminal activity, clothing, family, education, writing, travel and more. Applying tools from history, art anthropology, cultural studies, and English literature, it draws on a wide-range of sources, from the written to the visual, to highlight the diversity of women's experiences and to challenge current male-centric historiographies.

Katie Barclay is a Postdoctoral Research Fellow in the ARC Centre of Excellence for the History of Emotions, University of Adelaide. She is the author of Love, Intimacy and Power: Marriage and Patriarchy in Scotland, 1650-1850 (Manchester, 2011), winner of the 2012 Women’s History Network Book Prize and Joint Winner of the Senior Hume Brown Prize in Scottish History, and a number of articles on family life in Scotland. Deborah Simonton is Associate Professor of British History at the University of Southern Denmark and leads the Gender in the European Town Network. She is the author of A History of European Women's Work (London, 1998), Women in European Culture and Society: Gender, Skill and Identity from 1700 (London, 2010) and co-editor of Gender in Scottish History since 1700 (Edinburgh, 2006).

'... Women in Eighteenth-Century Scotland stands on its own for its breadth of approach and wide appeal. Although historians of Scottish gender history will certainly embrace this collection for the ways in which it moves forward discussions and debates regarding Scottish women in the early modern and modern periods, this book will also prove useful for European historians of these topics seeking comparisons with their own research. Similarly, given the wealth of approaches utilized by the authors of these essays, this collection will also be valued by those studying other disciplines ...' Early Modern Women: an Interdisciplinary Journal '... this is an appropriate moment to reflect on what we know about Scottish women during the eighteenth century, to ask how their history affects the traditional narratives of the period, and to reflect on the implications for a national history of Scotland and Scottish identity.' The Bootle Imp '... succinct introduction weaves the strands together into a cohesive whole, presenting the book as an appreciation of the current strength of research into women’s and gender history in 18th-century Scotland... the gathering together of these articles marks a moment to reflect on what we have learned about Scottish women and where future research must be directed to enhance our understanding.' Reviews in History '... represent[s] some of the most exciting developments in a now flourishing field.' Eighteenth-Century Scotland