Women in Law and Lawmaking in Nineteenth and Twentieth-Century Europe 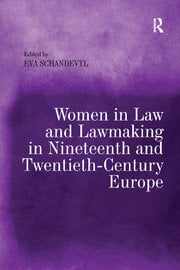 Women in Law and Lawmaking in Nineteenth and Twentieth-Century Europe

Exploring the relationship between gender and law in Europe from the nineteenth century to present, this collection examines the recent feminisation of justice, its historical beginnings and the impact of gendered constructions on jurisprudence. It looks at what influenced the breakthrough of women in the judicial world and what gender factors determine the position of women at the various levels of the legal system. Every chapter in this book addresses these issues either from the point of view of women's legal history, or from that of gendered legal cultures. With contributions from scholars with expertise in the major regions of Europe, this book demonstrates a commitment to a methodological framework that is sensitive to the intersection of gender theory, legal studies and public policy, and that is based on historical methodologies. As such the collection offers a valuable contribution both to women's history research, and the wider development of European legal history.

Contents: An introduction to women in law and law making in 19th and 20th century Europe, Eva Schandevyl. Part I History of Women in the Legal Profession: From philanthropists to juvenile judges: women dealing with juvenile delinquency. International debates and local practices in Belgium (1890-1960), Aurore FranÃ§ois and Christine Machiels; Feminist lawyers and legal reform in modern France, 1900-1946, Sara L. Kimble; Women’s admission to the legal profession in Germany between 1900 and 1933, Marion RÃ¶wekamp. Part II Gender Constructions and their Impact on Jurisprudence: Arbitrating class and gender: working-class women and labour arbitration in Tourcoing, 1848-1894, Mathieu BrÃ»lé; Bending the code civil: married women, their capacity to engage in contracts and the partnership between spouses (Belgium, 1804-c.1865), Dave De ruysscher; Women and law in 19th century Greece: the impact of the modern state, Evdoxios Doxiadis; Women’s rights in the late Russian Empire: the paradoxes of the legislative basis in the family sphere, Nadezda Belyakova and Taisiya Belyakova. Part III Gendered Legal Cultures in Global Perspective: Women lawyers and women’s equality movements at the turn of the 20th century: paradoxical relationships?, Mary Jane Mossman; Legal cultures in transition: the role of Italian jurist women, Maria Rita Bartolomei. Index.

Eva Schandevyl is Assistant Professor of modern history at the Vrije Universiteit Brussel, Belgium. She is the editor of ’In haar recht? Vrouwe Justitia feministisch bekeken’ (VUB Press, 2009) and author of ’Tussen revolutie en conformisme. Het engagement en de netwerken van linkse intellectuelen in BelgiÃ« 1918-1956’ (VUB Press, 2011). Her articles on the history of law and gender, social and intellectual history, and migration have appeared in ’European Review of History’, ’National Identities and Revue Belge de Philologie et d’Histoire’. She is presently working on a comparative project that examines the feminisation of justice in the twentieth century.

'Interdisciplinary in focus, the volume includes essays by both historians and legal experts, with contributors utilising a wide range of methodologies in their analyses of women and the law in several European countries...An impressive range of archival material is examined and fine and intriguing arguments are put forward. This is a volume that sheds welcome and thought-provoking light on women’s relationship with the law and will prove of interest to anyone with interests in European, women’s, or legal history.' - Adrienne E. Gavin, Canterbury Christ Church University, Nineteenth Century Gender Studies