Women in the Studio
Creativity, Control and Gender in Popular Music Sound Production 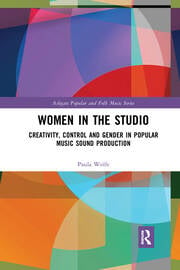 Women in the Studio: Creativity, Control and Gender in Popular Music Sound Production

The field of popular music production is overwhelmingly male dominated. Here, Paula Wolfe discusses gendered notions of creativity and examines the significant under-representation of women in studio production. Wolfe brings an invaluable perspective as both a working artist-producer and as a scholar, thereby offering a new body of research based on interviews and first-hand observation. Wolfe demonstrates that patriarchal frameworks continue to form the backbone of the music industry establishment but that women’s work in the creation and control of sound presents a potent challenge to gender stereotyping, marginalisation and containment of women’s achievements that is still in evidence in music marketing practices and media representation in the digital era.

Paula Wolfe has published in the areas of music production, music technology and gender, and regularly presents her research at national and international music conferences on a wide range of issues that accompany the work of women singer-songwriters, composers and producers. Practitioner as well as scholar, Wolfe is a critically acclaimed artist-producer and is currently promoting her third album, White Dots (Sib Records 2019). www.paulawolfe.co.uk

"A fascinating and timely book that explores the role of female producers in the music industry – both as DIY artists and in commercial studios. Wolfe reveals through in-depth interviews and analysis that female producers are a growing community, but they are still under-represented in the media, and marginalised by a music press that ignores their work amid a gendered discourse appealing to a male audience. An artist-producer herself, Wolfe presents a crucial insider view. Read it now!"
– Lucy O’Brien, author of She Bop: The definitive history of women in popular music (2013)

"In this timely book Paula Wolfe delivers an extensive and captivating critical discussion on gendered notions of creativity in the recording studio. Wolfe eloquently challenges gender stereotypes and illustrates how women’s achievements are still marginalised within the music industry by the ways in which they are marketed, represented and sold to audiences. This is a vital book for those studying gender in the music industry and even more essential for anyone working, playing or practicing within the music industry and beyond."
– Dr Paul Thompson, Leeds Beckett University

"Women in the Studio is an important and timely contribution from Paula Wolfe, which unpicks the entrenched inequalities of the music industries and lays them bare. More than that though, through its deep engagement with the voices of women in the field of music production and the realities of their agency in the recording studio, it offers productive insights into how women can, and are, breaking down the structures and values that have for so long been erected to contain them. For the emerging field of Songwriting Studies, Wolfe's attention to the female singer-songwriter serves as a powerful reminder of how the creativity of women has been marginalised and why there is hope for change and new understanding."
– Dr Simon Barber, Birmingham City University

‘Reducing gender imbalance and inequalities remains the biggest challenge of the early 21st century popular music industry. Paula Wolfe offers a rare empirical contribution on this cultural production paradigm that has lately become a hot topic in academia… Women in the Studio provides the reader with an exhaustive and up-to-date review of the popular music and gender literature, with a focus on the use of studio technology. Wolfe’s work supplements the growing body of the music production literature that has yet kept feminist visions silenced… I agree with Paul Thompson who stated in his endorsement that Women in the Studio is "essential for anyone working, playing or practicing within the music industry.'
– Amandine Pras, University of Lethbridge / George Simmel Center (EHESS, Paris)

'This book addresses an important theme of scholarship on music, one that has substantial ramifications for the creators of music: gender bias in music production. As with many important topics of research, it is hard to study. Even though the last couple of decades have seen an increasing awareness of the problems of gender inequality, there is still a considerable need for research that formulates good questions and which develops thorough answers. The book, Women in the Studio: Creativity, Control, and Gender in Popular Music Sound Production, offers numerous reflections on the problem, asks many questions and suggests several answers concerning the roots and forms of gender bias in music production.' Kjus, Y. (2020). Popular Music, 39(2), 373-375. doi:10.1017/S0261143020000306