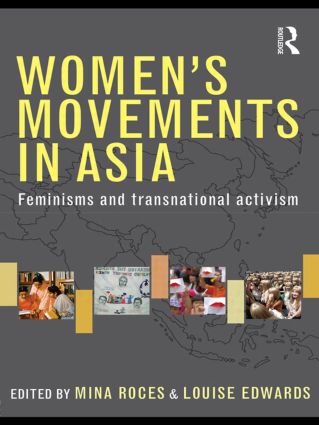 Women's Movements in Asia is a comprehensive study of women’s activism across Asia. With chapters written by leading international experts, it provides a full overview of the history of feminism, as well as the current context of the women’s movement in 12 countries: the Philippines, China, Indonesia, Japan, Burma, Singapore, Vietnam, Malaysia, Thailand, Cambodia, Hong Kong, Korea, India and Pakistan.

For each of these countries the manner in which feminism changes according to cultural, political, economic and religious factors is explored. The contributors investigate how national feminisms are influenced by transnational factors, such as the women’s movements in other countries, colonialism and international agencies. Each chapter also considers what Asian feminists have contributed to global theoretical debates on the woman question, the key successes and failures of the movements and what needs to be addressed in the future.

This breadth of coverage, together with suggestions for further reading and watching, and an integrated cross-national timeline makes Women's Movements in Asia ideal for use on courses looking at women and feminism in Asia. It will appeal both to students and specialists in the fields of gender, women’s and Asian studies.

"Experts in analysing gender issues offer this unique comparative analysis of the evolution of ‘national essence feminism’ in the context of global feminism. To find out how the women’s movement in twelve Asian nations have fought for bodily autonomy, participation in politics and religion, new definitions of womanhood, changed family relations and much more – this book is the best (indeed the only) one to read."

"These excellent essays on women's movements in 12 Asian countries are written by carefully selected authors who represent a variety of disciplines, including interdisciplinary women's and gender studies, and locations in Europe, Asia, the US, and Australia. The individual essays are very well conceived, and it is interesting to note issues of commonality (importance of culture, history of gender relations, uncertain politics) as well as those of difference (power of elite women, involvement of NGOs such as the YWCA), and agendas that range from health care for sex workers to participation in Buddhist hierarchy, and legal- and rights-based philosophies under more or less friendly regimes."

"The strength of this edited volume is the breadth and diversity of women's issues raised in each national context. The reader has the opportunity to learn about the rise of Islamic feminism in Indonesia and Pakistan and, at the same time, the struggles of Chinese feminists trying to put their agenda outside of the PRC Communist framework…In sum, this volume is a significant contribution to many fields including women's studies, and Asian history and civil society. It is a thoroughly researched, well written, and highly readable piece of feminist scholarship."

Louise Edwards is Professor of Modern China Studies at the University of Hong Kong.

Mina Roces is an Associate Professor in the School of History and Philosophy, The University of New South Wales, in Sydney, Australia.