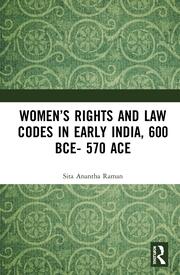 This book looks at the first eight Sanskrit law codes written in India, between 600 BCE and 570 ACE. It focuses on the legal, religious and ethical customs which were codified in this period and their impact on the social and political life of women.

The volume analyzes texts such as the Dharma Sūtras, the Arthaśāstra, the Manu Smŗiti, the Yājňyavalkya Smŗiti, and Nārada Smŗiti, amongst others. It studies discourses on justice, conduct, virtues and duties, and how early laws were used to systematize patriarchy and the varna caste system in South Asia. It examines how patrimonial laws and male property rights highlighted social anxieties about female chastity and varna lineage, which led to the subordination of women and the lower varnas. These anxieties are most evident in codes from the late Vedic and early classical eras when diverse new settlers arrived upon the subcontinent. At this time, kings decentralized governance and allowed local groups to practice communal laws, while they meted out court justice with a specific law code. As the state became prosperous from trade conducted by merchants of diverse castes, sects, and classes, and social peace was ensured by officials from disparate backgrounds, kings began to rely upon a law code that aspired for equity above intolerance. These chapters examine heterodox Therāvada Buddhism and Jainism, their origins in the oligarchic state, their impact on the royal Sanskritic state, as seen in canonical literature. They especially focus on women’s roles in heterodox sects, and the emergence of new spaces for women, as such changes were adopted in disparate ways and degrees by other South Asian communities.

The volume will be a useful resource for students and researchers of history, women and gender studies, social anthropology, sociology, and law. It will also serve as an information guide for readers who are interested in the political, and social life of women in early India

Sita Anantha Raman is Emerita Associate Professor of History at Santa Clara University, where she taught South Asian history and SE Asian history. She is the author of the books Women in India: A Social and Cultural History (Vols 1 and 2; 2009); A.Madhavaiah: A Biography and a Novella (‘Muthumeenakshi’, trans. by Vasantha Surya; 2004); and Getting Girls to School: Social Reform in the Tamil Districts, 1870–1930 (1996); and of various journal articles.