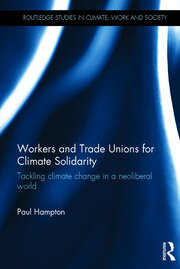 This book is a theoretically rich and empirically grounded account of UK trade union engagement with climate change over the last three decades. It offers a rigorous critique of the mainstream neoliberal and ecological modernisation approaches, extending the concepts of Marxist social and employment relations theory to the climate realm. The book applies insights from employment relations to the political economy of climate change, developing a model for understanding trade union behaviour over climate matters. The strong interdisciplinary approach draws together lessons from both physical and social science, providing an original empirical investigation into the climate politics of the UK trade union movement from high level officials down to workplace climate representatives, from issues of climate jobs to workers’ climate action.

This book will be of great interest to students and researchers in environmental politics, climate change and environmental sociology.

Paul Hampton received his PhD in climate change and employment relations from London Metropolitan University. He is head of research and policy at the Fire Brigades Union in the UK.

"This is a provocative book in the best sense of the word. The exploitation of nature and the exploitation of labour are two sides of the same capitalist dynamic; effective resistance to both requires a common struggle in which green activists and trade unionists combine as equal partners." –Richard Hyman, London School of Economics and Political Science, UK

"Environmental Labour studies is a young and burgeoning research field. This book is a landmark publication offering the first theoretically and empirically brilliant analysis of trade union’s actions for climate change in the UK, suggesting that the workers’ movement can become an environmental innovator in the struggle for climate justice." –Nora Räthzel, Umeå University, Sweden

"Paul Hampton’s analysis is built on a thorough review of mainstream and radical literature on the politics of climate change, together with an in depth narrative of worker and trade union attempts to grapple with climate change and the various forms of ‘green capitalism’ thinking in the UK context."–Paul Burkett, Indiana State University, USA

"Who has the interest and power to confront the apocalyptic dangers of global warming, and the vested interests blocking mitigation? This book tackles the largely ignored question of agency. Theoretically sophisticated and empirically thorough, it explores the potential of the working class and its organisations to lead an effective response."–Constance Lever-Tracy, University of South Australia, Australia

"Paul Hampton has assembled a wealth of evidence to demonstrate that trade unions are not only becoming increasingly important participants in climate change debates, but important actors in contributing to a more sustainable planet. This book deserves to be read by all those who profess to be interested not only in climate change and the environment, but also labour studies."–David Uzzell, University of Surrey, UK

"A ground-breaking book on the most timely of topics: how workers and their trade unions are organising in order to fuse struggles for social justice and against climate change. Highly recommended to anyone interested in environmental politics, industrial relations, social movements and sustainable development."–Romain Felli, University of Geneva and Swiss National Science Foundation, Switzerland

"At last a book arguing that presents convincing evidence of climate-conscious trade unionism, whether through environmental representatives or bargaining for a just transition, inspiring us all to become strategic climate actors."–Linda Clarke, University of Westminster, UK