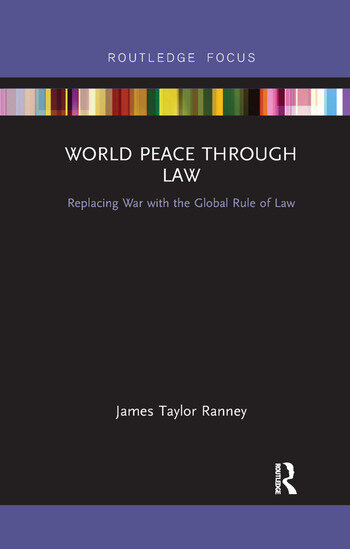 World Peace Through Law: Replacing War with the Global Rule of Law

This book deals with the history and future of the concept of ‘world peace through law’ (WPTL), which advocates replacing the use of international force with the global rule of law.

WPTL calls for replacing war with the global rule of law by arms reductions, including the abolition of nuclear weapons, global alternative dispute resolution mechanisms, and various enforcement mechanisms. This book sets forth a three-part proposal: 1) arms reductions – primarily the abolition of nuclear weapons, with necessarily concomitant reductions in conventional forces; 2) a four-stage system of global alternative dispute resolution (ADR), utilizing both law and equity; 3) adequate enforcement mechanisms, including a UN Peace Force. The core of this proposal is alternative dispute resolution mechanisms—international ADR. International ADR would consist of a four-stage process of compulsory negotiation, compulsory mediation, compulsory arbitration., and compulsory adjudication by the World Court. The fundamental proposition of this book is that the use of alternatives to war, global ADR, is the ultimate solution to the problem of peace. The full implementation of WPTL will entail a vast array of progressive initiatives on many fronts, including abolition of nuclear weapons, with the global rule of law being the capstone to all of these developments.

This book will be of great interest to students of peace studies, arms control, international law, and world politics.

James Taylor Ranney is a retired Adjunct Professor, Widener Law School, USA. He was a co-founder of the Jeannette Rankin Peace Center, a Legal Consultant to the United Nations International Criminal Tribunal for the Former Yugoslavia, Chair of the Philadelphia Chapter of Citizens for Global Solutions, and is currently a Board Member of the Project for Nuclear Awareness.

‘There are four reasons why you should read this book. First, the international system is inevitably being transformed by technology and global integration; this book presents a coherent vision of a successor system that would be superior to others currently on offer. Second, the system it describes is an answer to the perennial objection to eliminating nuclear weapons, which is that there is no better way to prevent war: yes, there is, it says. Third, this book is an encyclopaedic history of things you never knew before about world peace through law and the ‘practical men’ like Teddy Roosevelt, who supported the idea. And fourth, if you think ponderous prose goes with the territory on this subject, think again: this book is engaging, lively, and fun.’ -- James Goodby, Chief U.S. Negotiator for the Safe and Secure Dismantlement of Nuclear Weapons (1993).

‘There is no problem more important than halting the illegal use of armed force to settle international disputes. James Taylor Ranney's book offers the readers a comprehensive historical analysis with possible solutions to contemporaneous conflicts. It is an invaluable goldmine for all students concerned with current problems of world peace.’ -- Benjamin B. Ferencz, Former Nuremberg War Crimes Prosecutor and Peace Advocate

‘A powerful argument that the abolition of nuclear weapons requires a stronger regime for the peaceful resolution of international disputes. Ranney marshals compelling evidence that the world is moving in that direction in any case because of the need for peaceful solutions of the multiplying issues that are arising in global markets and the global commons. The danger from nuclear weapons is so acute, however, that this evolutionary process is insufficient. A more urgent, focused effort is required.’

‘Just when the vision of a world at peace seems to have faded into obscurity, James Taylor Ranney comes along with an updated version of his classic study 'Peace through Law'. It could also be titled 'Peace is Possible' and will encourage visionaries and convert sceptics.’

‘This book is refreshing and a badly needed antidote at a time when hawks with sinister faces tell us that peace and arms control can be threatened by a convention that commits states to non-use and non-possession of nuclear weapons. When the world is spending nearly two trillion dollars a year on means and measures to blow us up, Professor Ranney has the temerity to argue for the ending of wars. He does not grope for a world federation or general and complete disarmament, but rather for reliance on law and moderate and time honoured means such as mediation, arbitration and UN forces.’

‘In this lively, creative challenge to war - and especially nuclear war - James T. Ranney provides us with a path toward an international system governed by law rather than by violence. Championing arms reductions and dispute resolution, backed by effective enforcement, Ranney outlines a practical way to move toward a more peaceful world.’

‘James Taylor Ranney's book straddles a number of subject areas in a creative and very readable fashion. It should be of interest to those interested in international relations, security studies, disarmament, peace studies, dispute resolution and, of course, international law and international organizations.’ -- Roger S. Clark, Rutgers University, USA

'On the basis of lifelong learning and deep ethical commitments, James Taylor Ranney has produced a comprehensive guide to how peace might be secured in our troubled times by a prudent reliance on the mechanisms, institutions, and values of law. Every engaged citizen has an obligation to read this book and ponder its central prescriptions for achieving a peaceful world.' -- Richard Falk, Professor Emeritus, Princeton University, USA

‘This new work merging history, political science, and jurisprudence is superbly clear, accessible and cogent not only for scholars and academics, but also for leaders and decision-makers in governmental and non-governmental organizations, and for all looking to become better informed on how to achieve and maintain peace through the global rule of law.’ -- Kevin Govern, Center for Ethics and the Rule of Law, USA

‘In World Peace Through Law James Taylor Ranney thoughtfully proposes concrete measures that could lead countries to abolish nuclear weapons, establish compulsory international dispute settlement mechanisms, and create effective enforcement mechanisms, including an international police force. Carefully researched, the book analyzes the intellectual roots of the world peace through law concept and explores the efforts of activists and politicians – including many U.S. Presidents, both Democratic and Republican – to realize its core features. The world greatly needs Ranney’s mix of idealism and pragmatism concerning how international law can further the essential goals of peace and security.’

‘In this stimulating, thought-provoking, thoroughly researched, and historically grounded volume, James Taylor Ranney brings together his reflections on world peace through the rule of law carefully and systematically developed over the course of several decades. His argument and seriousness of purpose are enhanced throughout by his candid discussions of the counter- positions of those who disagree with him and his honest acknowledgment that there are ‘many different paths to peace’. Ranney describes himself as a ‘pragmatic idealist’ who is realistic about the weaknesses of existing international law but at the same time optimistic about its future possibilities. Toward this end, he is owed a debt of gratitude for his vision of how the world might move toward future peace.’ -- Paul Gordon Lauren, University of Montana, USA