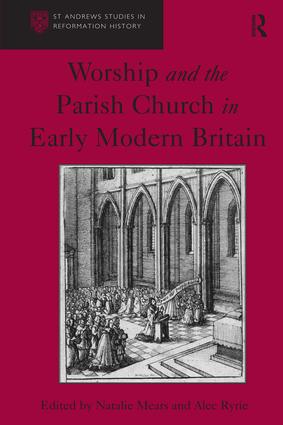 Worship and the Parish Church in Early Modern Britain

The Parish Church was the primary site of religious practice throughout the early modern period. This was particularly so for the silent majority of the English population, who conformed outwardly to the successive religious upheavals of the sixteenth and seventeenth centuries. What such public conformity might have meant has attracted less attention - and, ironically, is sometimes less well documented - than the non-conformity or semi-conformity of recusants, church-papists, Puritan conventiclers or separatists. In this volume, ten leading scholars of early modern religion explore the experience of parish worship in England during the Reformation and the century that followed it. As the contributors argue, parish worship in this period was of critical theological, cultural and even political importance. The volume's key themes are the interlocking importance of liturgy, music, the sermon and the parishioners' own bodies; the ways in which religious change was received, initiated, negotiated, embraced or subverted in local contexts; and the dialectic between practice and belief which helped to make both so contentious. The contributors - historians, historical theologians and literary scholars - through their commitment to an interdisciplinary approach to the subject, provide fruitful and revealing insights into this intersection of private and public worship. This collection is a sister volume to Martin and Ryrie (eds), Private and Domestic Devotion in Early Modern Britain. Together these two volumes focus and drive forward scholarship on the lived experience of early modern religion, as it was practised in the sixteenth and seventeenth centuries.

'This is a remarkably coherent volume of essays on the worship experiences in the early modern English parish church …' Sixteenth Century Journal 'Each chapter works on a specific corner of the picture, and although there is a great deal still to be done, the book succeeds admirably in opening up its subject matter and advancing our knowledge of key tensions in liturgy, music, and in the space of the early modern church itself.' H-Albion 'Placed alongside the conclusions of John Harper’s Experience of Worship project on the late Middle Ages, however, this stimulating volume allows religious historians of Britain to arrive at a much clearer understanding of liturgical continuities and changes over the course of the long sixteenth century.' Renaissance Quarterly '… the collection is successful in its aim to draw attention to the conflicts and mismatches between religious practice and institutional instruction that characterized ’an ordinary parish church on a Sunday morning’ (p. 10). In this respect, it is a valuable addition to studies of popular religion and public worship, and of particular interest to theologians, cultural historians, and historians of early modern religion.' Journal of the Northern Renaissance ’This is a wonderful collection of articles that all fulfil the task of exposing complexities, continuities, paradoxes, and tease out new ideas on what might seem at first sight a rather eclectic array of starting points. And there is the added benefit of a table of nationwide prayers from 1534-1641, provided by Natalie Mears, and a foretaste of more to come from a much larger project. Congratulations are due to the editors and their contributors on pulling this fascinating collection together so well.’ Ecclesiology Today 'These studies have produced important insights that increase our understanding of religion as a lived experience within the plurality of English religious cultures. … the three editors of the matched pair of volumes