Wounded Cities
Destruction and Reconstruction in a Globalized World 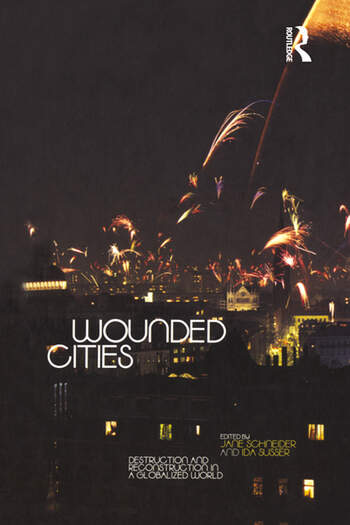 Wounded Cities: Destruction and Reconstruction in a Globalized World

Although the seemingly apocalyptic scale of the World Trade Center disaster continues to haunt people across the globe, it is only the most recent example of a city tragically wounded. Cities are, in fact, perpetually caught up in cycles of degeneration and renewal. As with the WTC, from time to time these cycles are severely ruptured by a sudden, unpredictable event. In the wake of recent terrorist activities, this timely book explores how urban populations are affected by wounds inflicted through violence, civil wars, overbuilding, drug trafficking, and the collapse of infrastructures, as well as natural disasters such as earthquakes. Mexico City, New York, Beirut, Belfast, Bangkok and Baghdad are just a few examples of cities riddled with problems that undermine, on a daily basis, the quality of urban life. What does it mean for urban dwellers when the infrastructure of a city collapses transport, communication grids, heat, light, roads, water, and sanitation? What are the effects of foreign investment and huge construction projects on urban populations and how does this change the look and character of a city? How does drug trafficking intersect with class, race, and gender, and what impact does it have on vulnerable urban communities? How do political corruption and mafia networks distort the built environment? Drawing on in-depth case studies from across the globe, this book answers these intriguing questions through its rigorous consideration of changing global and national contexts, social movements, and corrosive urban events. Adopting a grass roots up approach, it places emphasis on peoples experiences of uneven development and inequality, their engagement with memory in the face of continual change, and the relevance of political activism to bettering their lives. It is especially attentive to the historical interaction of particular cities with wider political and economic forces, as these interactions have shaped local governance over time.

List of Figures List of Contributors Acknowledgments 1 Wounded Cities: Destruction and Reconstruction in a Globalized World 2 The City as a Body Politic Part I The Degradation of Urban Life 3 The Depreciation of Life During Mexico City's Transition into "the Crisis" 4 International Commodity Markets, Local Land Markets and Class Conflict in a Provincial Mexican 5 Rethinking Infrastructure: Siberian Cities and the Great Freeze of January 2001 Part II Crises of Crime and Criminalization 6 How Kingston was Wounded, 7 Wounded Medellin: Narcotics Traffic against a Background of Industrial Decline 8 Global Justice in the Postindustrial City: Urban Activism Beyond the Global-local Split 9 After Drugs and the "War on Drugs": Reclaiming the Power to Make History in Harlem, New York Part III Rapid, Inconsistent Expansion 10 Bangkok, The Bubble City 11 Contemporary Ho Chi Minh City in Numerous Contradictions: Reform Policy, Foreign Capital and the Working Class Part IV Reconstruction and Recovery 12 Belfast: Urban Space, "Policing" and Sectarian Polarization 13 "Healing the Wounds of the War": Placing the War-displaced in Postwar Beirut 14 Wounded Palermo