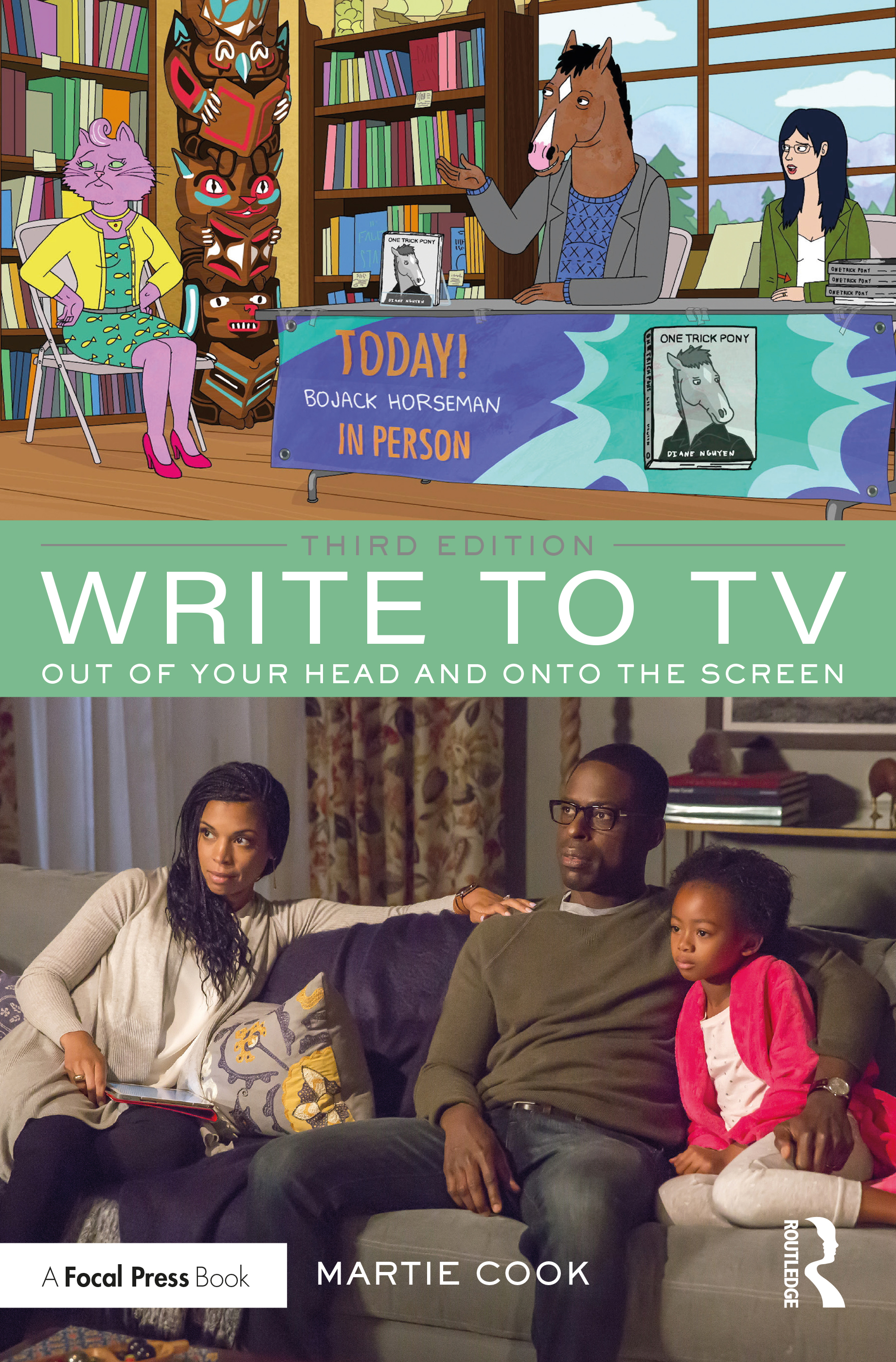 Out of Your Head and onto the Screen, 3rd Edition

In Write to TV 3rd edition industry veteran Martie Cook offers practical advice on writing innovative television scripts that will allow you to finally get that big idea out of your head and onto the screen. With this book, you’ll learn to craft smart, original stories and scripts for a variety of television formats and genres, including comedy, drama, pilots, web series, and subscription video on demand.

This new edition has been updated with expanded coverage on writing for global audiences, content creation for streaming services such as Netflix, Amazon and Hulu, as well as writing the web series, podcasts and utilizing free platforms such as YouTube. It also features new chapters on writing for niche markets; breaking into the writers’ room; creating binge-worthy series and how to accompany pilot scripts with a series pitch document. Plus, expanded information on creating complex and compelling characters including writing anti-heroes and strong female protagonists and much, much more.

Including information directly from studio and network executives, agents, and managers on what they’re looking for in new writers and how to avoid common pitfalls, advice from successful creators and showrunners on creating original content that sells, and tips from new writers on how to get into a writers’ room and stay there. This book contains information from over 20 new interviews, access to sample outlines, script pages, checklists, and countless other invaluable resources, and is the ideal book for anyone who wants to break into the TV writing industry.

"Martie Cook’s Write to TV is an essential tool and resource in the screenwriting classroom. Students learn from excellent examples and a diverse array of writing topics that equip future writers into the dynamic and ever expanding world of writing for television and streaming media. Terrific book, my students love it!"

Praise for the Previous Edition:

"Martie Cook has one of the best minds out there when it comes to writing for television. Her experience and insight played a crucial role in shaping my writing career, and I'm thrilled for the aspiring writers who will surely benefit from the wisdom in these pages!"

"Martie Cook's Write to TV is required reading for anyone considering a career in TV writing. More than any other single thing, I owe my success to following her teachings."

"I think this is about the best book on writing for television out there. I hope it sells like crazy because television will be better for it."

"Write to TV takes you inside the minds of writers, producers, and network suits in this brutally honest book. A ‘must read’ for anyone who has the dream of making it in Hollywood. I wish I had read this book 20 years ago!"

"Martie Cook’s Write to TV is the best book I’ve found on the subject in 20 years as a prime time writer/producer and 15 years as a college professor teaching the subject. I highly recommend it for anyone who wants to learn the ins and outs of writing TV comedy and drama."

Ross Brown, Associate Professor of Film and Media Arts, Dodge College at Chapman University; Writer, The Cosby Show; Who's the Boss?; Step By Step; Author, Create Your Own TV Series for the Internet

"Write to TV is an invaluable resource not just for writers but for anyone interested in getting the inside scoop about the way the industry works and how to break in. It gives an extensive overview of the current world of TV and a step-by-step guide for the new writer in town. It's anecdotal yet informational, entertaining yet insightful. Because the author has lived this experience, she can give a first hand step-by-step account of how you get from that first pitch to the on-screen credit."

"Martie Cook imparts a tremendous amount of knowledge in a way that is both easy to understand and entertaining. It is like having a mentor in book form."

Christopher Crowe, Writer, The Last of the Mohicans; Fear

"Martie Cook’s Write To TV is a smart ‘How It Is’ book. It’s an inspiring and edifying insider’s first-hand experience and knowledge imparted lovingly and entertainingly. It’s a book you can’t set down once you begin and when you’re done you’ll know what it takes to be successful in breaking into the business—the rest is up to you."

PART I How Hollywood Works

Chapter 1 FROM DINOSUAR TO DIGITAL: AN OVERVIEW OF THE TV INDUSTRY

Chapter 2 THE LAY OF THE LAND

Chapter 4 GETTING YOUR SCRIPTS READ

Chapter 10 OTHER KINDS OF TV COMEDY

Chapter 15 THE MECHANICS OF a TELEVISION PILOT

Chapter 16 BUILDING YOUR SERIES FROM THE GROUND UP

Chapter 19 WRITING DIALOGUE THAT DANCES ON

Chapter 20 REWRITE THE HECK OUT OF IT

PART VIII Pitch Perfect: How to Pitch Stories and Series

Chapter 21 ESSENSIALS OF A PROFESSIONAL PITCH

PART IX Niche Can Be Nice

PART X Thinking Out of the Box

PART XI The Business Side of Television

Chapter 26 THE WRITERS GUILD OF AMERICA

PART XII How to Get Your Foot in the Door

Chapter 29 HOW TO GET WORK AS A

Chapter 30 GETTING THE INTERVIEW

Chapter 31 CONGRATULATIONS, YOU’VE GOT THE

Chapter 32 THE POWER OF NETWORKING

Should You Bring Your Spec Scripts?

Chapter 33 OTHER THINGS THAT CAN HELP YOU

Chapter 34 Welcome to the Room!

Martie Cook has over three decades of experience as a respected writer and producer of television and film. She has worked for all four major networks and PBS as well as for Warner Bros., 20th Century Fox, Columbia Pictures, and Universal Studios. A member of the Writers Guild of America West, Cook has written for hit television shows such as the top-ten Nielsen rated Full House, and the cult classic, Charles in Charge. She has served as a writer/producer for Entertainment Tonight, America's Most Wanted, and the PBS Emmy-award winning children's show Zoom. Cook currently teaches Television Writing at Emerson College in Boston, MA, where she also serves as the director of the BFA in Comedic Arts and the Founding Director of the Center for Comedic Arts.