Writing Fashion in Early Modern Italy
From Sprezzatura to Satire 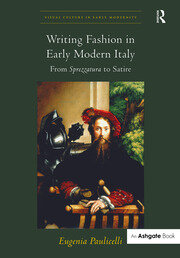 Writing Fashion in Early Modern Italy: From Sprezzatura to Satire

The first comprehensive study on the role of Italian fashion and Italian literature, this book analyzes clothing and fashion as described and represented in literary texts and costume books in the Italy of the 16th and 17th centuries. Writing Fashion in Early Modern Italy emphasizes the centrality of Italian literature and culture for understanding modern theories of fashion and gauging its impact in the shaping of codes of civility and taste in Europe and the West. Using literature to uncover what has been called the ’animatedness of clothing,’ author Eugenia Paulicelli explores the political meanings that clothing produces in public space. At the core of the book is the idea that the texts examined here act as maps that, first, pinpoint the establishment of fashion as a social institution of modernity; and, second, gauge the meaning of clothing at a personal and a political level. As well as Castiglione’s The Book of the Courtier and Cesare Vecellio’s The Clothing of the Renaissance World, the author looks at works by Italian writers whose books are not yet available in English translation, such as those by Giacomo Franco, Arcangela Tarabotti, and Agostino Lampugnani. Paying particular attention to literature and the relevance of clothing in the shaping of codes of civility and style, this volume complements the existing and important works on Italian fashion and material culture in the Renaissance. It makes the case for the centrality of Italian literature and the interconnectedness of texts from a variety of genres for an understanding of the history of Italian style, and serves to contextualize the debate on dress in other European literatures.

Eugenia Paulicelli is Professor of Italian, Comparative Literature and Women’s Studies at Queens College and the Graduate Center of The City University of New York, USA. She directs two programs in Fashion Studies: a PhD concentration and an MA in Liberal Studies.

'Eugenia Paulicelli presents a convincing argument for the crucial significance of clothing and fashion in the mentalities of early modern Europe; her book is richly informed by the research of economic, social, and feminist historians, historians of dress, and by her own alertness to the links between past and present in the ways that dress is presented today. Her narrative incorporates close readings of a wide and interesting array of early modern writings, and offers a wealth of intriguing examples - the fashionable rosary, the mustachioed gallant, the revolver-toting Frenchwoman-as well as possibilities for further work in the field.' Ann Rosalind Jones, Smith College, USA

'In the sixteenth and seventeenth centuries fashion came to characterise a 'modern' new world, one in which changes in shapes, materials, colours and manners had to be recognised and understood. Eugenia Paulicelli's book is a spectacular investigation of the discourse of fashion in early modern Italy, from Baldassarre Castiglione to Cesare Vecellio, to Arcangela Tarabotti. In this book you will find yourself immersed in an early modern society obsessed with civility, love, vice, dissimulation and, of course, fashion.' Giorgio Riello, University of Warwick, UK

'... it's impossible to address the myriad of issues, attitudes and details that Paulicelli has expertly compiled in this text. Just put this book in your hands. In fact, I'm going to read it again ...' Worn Through

'Paulicelli has painted a vast canvas, revealing the elusiveness of fast-moving fashion and anxieties around its management or control in the century before Louis XIV laid the foundations of French fashion-leadership ... [this book] will be of particular use to students and teachers of literature who are interested in the interconnections between word and image, and between later theories of fashion and early modern representations of dress.' Costume

'The focus on 'writing' fashion allows the reader a fascinating insight into the ways in which dress shaped and was shaped by discourse which ranged much further than clothing the body.' Reviews in History

'We should be grateful to Eugenia Paulicelli for laying the groundwork for these exciting opportunities for further research and producing a book that will undoubtedly become a standard reference point in fashion history.' Renaissance Quarterly

'The book as a whole is aimed at a specialist, academic audience ... Its opening chapter provides an introduction to fashion in early modern Italy, helpfully integrating the English and Italian historiography on this topic. The book also serves to draw attention, in the context of English-language discussions of European fashion, to the importance of the as-yet-untranslated texts discussed in the last part of the book.' Parergon