Writing Wales, from the Renaissance to Romanticism 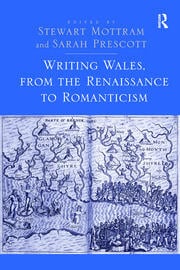 Writing Wales, from the Renaissance to Romanticism

Writing Wales explores representations of Wales in English and Welsh literatures written across a broad sweep of history, from the union of Wales with England in 1536 to the beginnings of its industrialization at the turn of the nineteenth century. The collection offers a timely contribution to the current devolutionary energies that are transforming the study of British literatures today, and it builds on recent work on Wales in Renaissance, eighteenth-century, and Romantic literary studies. What is unique about Writing Wales is that it cuts across these period divisions to enable readers for the first time to chart the development of literary treatments of Wales across three of the most tumultuous centuries in the history of British state-formation. Writing Wales explores how these period divisions have helped shape scholarly treatments of Wales, and it asks if we should continue to reinforce such period divisions, or else reconfigure our approach to Wales' literary past. The essays collected here reflect the full 300-year time span of the volume and explore writers canonical and non-canonical alike: George Peele, Michael Drayton, Henry Vaughan, Katherine Philips, and John Dyer here feature alongside other lesser-known authors. The collection showcases the wide variety of literary representations of Wales, and it explores relationships between the perception of Wales in literature and the realities of its role on the British political stage.

'Prefaced by a boundary-marking introduction by the two editors, this well-produced collection of articles, featuring leading experts, a wide range of subject material, and a comprehensive bibliography, is essential reading for scholars and students of the making of early modern Britain.' Eighteenth Century Fiction