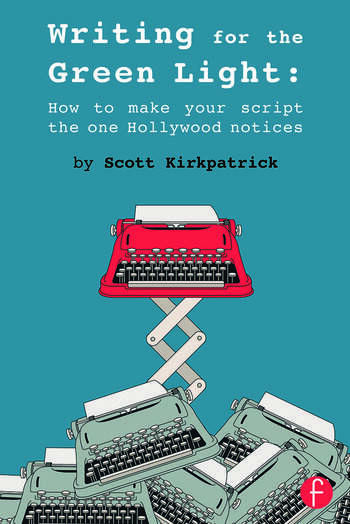 Writing for the Green Light: How to Make Your Script the One Hollywood Notices

Tailor your screenplay to sell. Find out what Hollywood script readers, producers, and studio executives want in a screenplay (and why) from someone who’s been there. Discover what it takes to begin a lasting career as a screenwriter.

Peppered with interviews from established professionals, Writing for the Green Light: How to Make Your Script the One Hollywood Notices gives you a sharp competitive edge by showcasing dozens of everyday events that go on at the studios but are rarely if ever discussed in most screenwriting books. With his behind-the-scenes perspective, Scott Kirkpatrick shows you why the system works the way it does and how you can use its unwritten rules to your advantage. He answers such questions as:

These and other insights are sure to give you and your screenplay a leg-up for success in this competitive landscape!

– What Agents, Producers, and Development Executives at Production Companies need in a script to make it worth spending money on.

– Which genres get produced, which genres don’t, and why… Plus, the six best genres for first-time Spec Scripts.

– How to transform an idea into a ‘market-ready’ Spec Script while including all the ‘points’ it needs to get past the ‘Reader’s Desk’.

– Understanding how to wedge yourself ‘inside’ Hollywood’s TV Landscape by building a valuable portfolio of Sample TV Spec Scripts and learning Television’s real ‘Entry Points’ for success.

– Who you need to know and how to contact them; plus, how to fake confidence so you can pitch your script (and yourself) in the way Hollywood needs to hear.

CHAPTER SIX – To Live and Write in L.A.

– Living the life of a professional Hollywood writer: protecting your ideas, negotiating your own contracts and managing your reputation.

CHAPTER SEVEN – Hollywood: And Beyond the Infinite

– Understanding where Hollywood is going and how to get ahead of the curve by following the principles of the movie business instead of chasing trends.

– All the fancy (and confusing) acronyms that get tossed around and what they really mean.

Scott Kirkpatrick is the Director of Distribution for MarVista Entertainment, a Los Angeles based production and distribution company that produces original Lifetime and SyFy channel films, co-produces TV movies with Disney and Nickelodeon, and has managed international TV deals on major franchises including Mighty Morphin Power Rangers, Digimon, and Julius Jr. Scott has also produced and directed TV series and feature films including Eye for an Eye, Muslims in America, and Roadside Massacre.

"Writing for the Green Light provides an insightful look into what distributors and production companies are looking for in a project and the unspoken rules on which Hollywood operates. If you’re trying to break into the entertainment industry and get your work noticed, this is the book for you."

"I could list all the brilliant snippets of information and advice but if I started I just wouldn't know which bits to include and which to leave out - so buy the book and read it for yourself! You won't be disappointed - even if you aren't a scriptwriter (and I'm not) it's well worth having it just to better understand how the process works and, if you are a scriptwriter, it'll certainly help you to better understand what the industry needs and hopefully help you to move along with a little more confidence in your chosen career."

"What this book provides that no other screenwriting book does (nor my expensive NYU Film School education did) is a practical guide. There are good, useful tips for breaking in and starting a career as screenwriter."