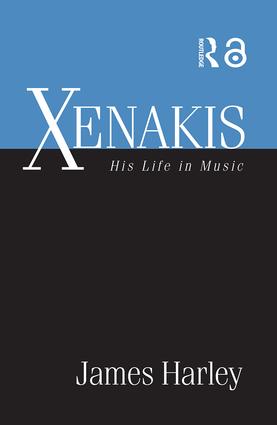 His Life in Music, 1st Edition

Xenakis: His Life in Music is a full-length study of the influential contemporary composer Iannis Xenakis. Following the trajectory of Xenakis’s compositional development, James Harley, who studied with Xenakis, presents the works together with clear explanations of the technical and conceptual innovations that shaped them.

Harley examines the relationship between the composer and two early influences: Messiaen and Le Corbusier. Particular attention is paid to analyzing works which were vital to the composer’s creative development, from early, unpublished works to the breakthrough pieces Metastasis and Pithoprakta, through the oft-discussed decade of formalization and the evolving styles of the succeeding three decades.

Preface to the Paperback Edition Preface Acknowledgments 1. The Outsider 2. From the Personal to the Individual 3. From Architecture to Algorithm 4. The Voice, the Stage, and a New Conception of Time 5. Arborescences, Random Walks, and Cosmic Conceptions 6. Sieves, Ensembles, and Thoughts of Death 7. Melody, Harmonic Color, and Nonlinear Form 8. The Late Works: Abstraction and Intensity Epilogue Notes Bibliography Index .

James Harley, Canadian composer, writer, and educator, has written widely on contemporary music. His articles and reviews have also appeared in The Musical Times, Musicworks, Muzyka, Sonances, Leonardo, and TEMPO. He studied under Xenakis at the Université de Paris and carried out an extended residency at Centre d'Etudes Mathématiques et Automatique Musicales (CEMAMu), where he completed two compositions using the UPIC, Xenakis’s computer music system based on a graphic-design approach to synthesis.