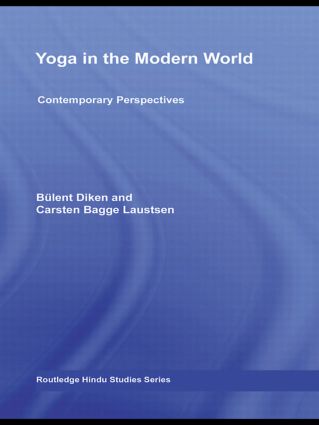 Yoga in the Modern World

Today yoga is a thoroughly globalised phenomenon. Yoga has taken the world by storm and is even seeing renewed popularity in India. Both in India and abroad, adults, children and teenagers are practicing yoga in diverse settings; gyms, schools, home, work, yoga studios and temples. The yoga diaspora began well over a hundred years ago and we continue to see new manifestations and uses of Yoga in the modern world.

As the first of its kind this collection draws together cutting edge scholarship in the field, focusing on the theory and practice of yoga in contemporary times. Offering a range of perspectives on yoga's contemporary manifestations, it maps the movement, development and consolidation of yoga in global settings. The collection features some of the most well-known authors within the field and newer voices. The contributions span a number of disciplines in the humanities, including, anthropology, Philosophy, Studies in Religion and Asian studies, offering a range of entry points to the issues involved in the study of the subject. As such, is of use to those involved in academic scholarship, as well as to the growing number of yoga practitioners who seek a deeper account of the origin and significance of the techniques and traditions they are engaging with. It will also-and perhaps most of all-speak to the growing numbers of 'scholar-practitioners' who straddle these two realms.

Further resources and supporting material are available to view at www.yogainthemodernworld.com

Part I: Mapping the Terrain of Modern Yoga Studies

3. ‘Adapt, Adjust, Accommodate’: The Production of Yoga in a Transnational World (SARAH STRAUSS)

5. The Reflexivity of the Authenticity of Hatha Yoga (KENNETH LIBERMAN)

7. ‘With heat even iron will bend’: Discipline and authority in Ashtanga Vinyasa Yoga (BENJAMIN RICHARD SMITH)

8. The Numinous and Cessative in Modern Yoga (STUART RAY SARBACKER)

9. From Fusion to Confusion: A Consideration of Sex and Sexuality in Traditional and Contemporary Yoga (MIKEL BURLEY)

Mark Singleton teaches at St. John's College, Santa Fe, USA. He works on the history of ideas within transnational modern yoga, and he is a contributor to the Encyclopedia of Hinduism (Routledge 2007). Jean Byrne is affiliated with the University of Queensland, Australia and her research explores the intersection of feminist theory and yoga philosophy and practice. She lectures in Eastern Philosophy and runs The Yoga Space in Perth, Australia where she teaches Ashtanga Yoga.